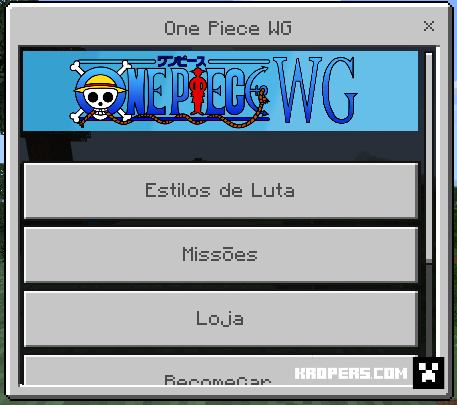 markus
17:46, 26 October 2021
349
0
One Piece WG - is an adventure addon for anime fans One Piece, where you have the possibility to be either a Sailor or a Pirate, each with their own missions and evolutions, it's a great addon to play with friends. be made war between sailors and pirates, the addon has several fruits, swords, npc's, and much more.

This addon is based on the One Piece anime so there are several mechanics of the anime present in the game
1° You can choose to be a sailor or a pirate
2° The addon has its own menu, having fighting styles, quests and shop
3° The addon has some fighting styles available each one giving the player an ability
4° The addon has its own mission system, there are few so far as it is under development
5° The addon has the shop system available in the main menu, having 2 npc's that have trade in the game
6° The addon has its own interface for the player to view their status
7° After selecting between pirate or sailor there is the possibility to choose your race
8° Inside the game there are some Npc's characteristic of the anime, having their own drops and some still have trade
9° To buy something in the game you need Belly which is the game currency you can earn it by killing enemies or looting ships
10° The addon has many items that can be purchased in survival mode.
11° The addon has several fruits, swords, styles, etc, to find a fruit you need to find a navy boat that randomly spreads across the game's ocean
But be careful as the boat is well protected by sailors or pirates
After completely cleaning the boat, it is possible to find a chest.
When you break it it will drop random items which can be a fruit or a belly.
There are several fruits in the addon each with its own ability.
Keep in mind that after consuming a fruit the player loses the ability to swim!

This is an overview of the addon, but it has many items, fruits, swords, etc... all items can be obtained in survival mode without the need to use commands to get