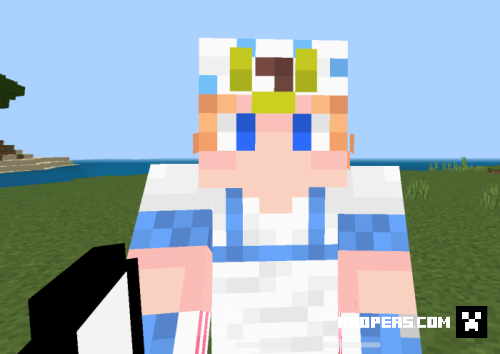 Here are some things featured in the addon
-mobs
-johnny joestar
-he is a neutral mob who only attacks if attacked, you can also trade a corpse arm to him to get chamomile tea
-diego brando
-he is a neutral mob and fights johnny and gyro, he is very fast and if killed can either drop a corpse arm or his claws, which do 13 damage
-gyro zeppeli
-he is a neutral mob and can be traded a chamomile tea for a spin instructions sheet, which can be used to get johnny's spin, and if killed drops a steel ball which can be used as a projectile weapon
-funny valentine
-valentine is a boss which has a low spawnrate and has 150 health, during the fight he will spawn multiple clones which have 5 health, and when killed drops either a corpse part, love train,flag teleport, or clone spawner
-hot pants
-hot pants is a neutral character who fights johnny, gyro, or mike O. She drops/uses a stand called cream setter which gives the wither effect when shot at someone
-lucy steel
-does nothing, is only here because I wanted to add an extra character from sbr
-Mike O
-he is a neutral mob who fights hot pants and occasionally summons a balloon minion which has 3 health.he also fights johnny and gyro.
-Jesus
-jesus is a passive mob who has 10000 health and only fights valentine,he can be traded chamomile tea and other stuff for corpse parts.
-items and recipes
-love train
-can be dropped by funny valentine or crafted with all the corpse parts, does 100 damage as well as give you godlike status effects
-magnum
-is a projectile weapon, can be crafted with leather,and iron
-Infinite rotation
-is a projectile which does 30 damage, can be crafted with a corpse foot, is great for killing valentine early/mid game
-johnny nail
-Aka johnny spin, its a projectile weapon and can be crafted with spin instructions
This is a small addon but its the biggest Ive done so far.

Go into a file app, click the mcaddon file and select "open with minecraft"