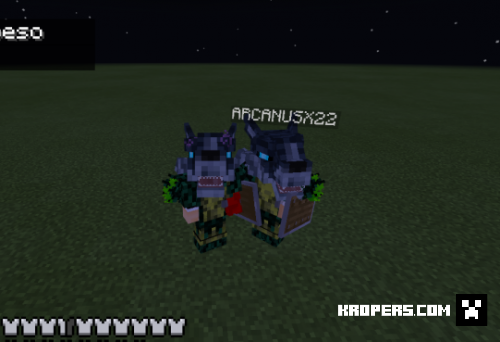 markus
13:54, 18 October 2021
189
0
Hello traveler, today Fenrir studios brings you an incredible addon which has 4 incredible new bosses which will make your survival more entertaining so join me as we will see creatures from Greek mythology this addon was developed by SystemTv and Arcanus

This mob will appear in the nether, with 3 types of roar attack with a push force of 6 and a damage of 12 when it reaches half life, it will give a roar and spawn 4 minions that will help its master to finish his objectives, a Melee attack with an attack of 13 to 17 damage and a lunge that gives an attack damage of 10 to 14 plus a push and a life of 400
When you manage to kill this boss, his head will be like a trophy and armor to equip you, he will also give you his heart and his tail. These items will be used to make new crafts like a battle ax.

This mob will be invoked by the cerberus to be able to finish more quickly with its objectives, they are very fast and have an attack damage between 2 to 4 and a life of 30, when you kill this mob it will release its scales with which you can craft a Chest and some henchman horns

Head of Cerberus and Chest of Minion

This boss appears on an island that is generated in the oceans, the island is giant and is called the island of Medusa, on this island you can face this feared monster you have to be very careful with this mob since it is in a rage when it You are attacking you can turn into stone, if you want to free yourself from this situation you must hit the ground a total of 10 times, also Medusa has a melee attack that does a total of 11 to 16 attack damage and a life of 400 but what makes it dangerous is its previously stated ability to turn you to stone
When you manage to kill this mob, it will release useful things like a head that will allow you to do various things such as turn other players to stone and be immune to being turned into stone either by jellyfish or by other players who managed to kill this beast, It will also grant you a chest that you can equip as armor

This mob appears in the swamps with a life of 300 and 2 types of attacks that are melee attack that does a total of 12 damage and with a pushing force of 6 and a range attack which allows it to launch a projectile of poison that affects all entities within a radius of 5, when this mob reaches half life it will lose one of its heads if you let a total of 15 seconds pass the head will regenerate and in turn also life this will do all the times necessary if you do not kill him in time
When you manage to kill this mob, it will give you some very useful items that you will serve to be able to craft very interesting things such as hydra armor, hydra potion and a battle ax

This mob appears in deserts with a total of 2 attack types that are melee with 12 attack damage and a ranged attack that allows it to launch a poisonous projectile that affects all mobs in a radius of 5, as well. this mob will have a chance to fly and attack you from the skies
When you manage to kill this mob it will grant you skin, hair, stinger, wing and manticore head and all this will serve to craft an armor that will allow you to fly the skies like a manticore