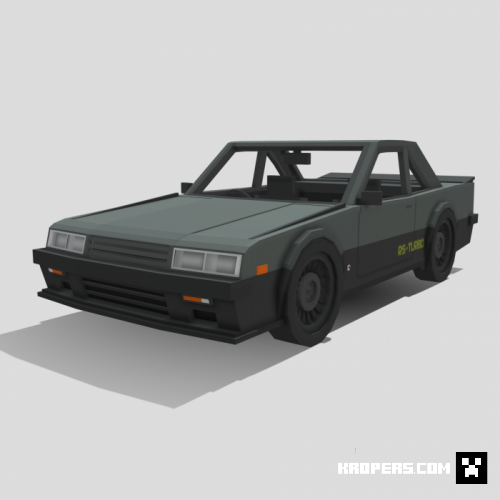 If you thought this was just a mere collection of the cars I've made, you're absolutely wrong. Unlike in the individual car projects/addons that I've posted, players can now color the cars according to their preference (like in the original JDM Legacy). More information on this will be explained below.
Aside that, all the cars now have better sound effects such as custom hit sound effects, open/close doors/popup headlights sound effects and startup sound effects. This time, without the need of Minecraft's Experimental Features (great for people like me who are homo-experimental mode).
In a nutshell:
• This addon adds 15 cars (13 cars with 2 custom versions), each of which have it's own set of colors and liveries.
• Can be coloured according to the player's preference using a custom item available in the pack (PaintMatic)
• All the cars now have up-to-date sound effects (list of sound effects can be found below) without the use of Experimental Mode.
• All the cars have openable/closeable doors
• Most cars have openable/closeable hoods (for cars with engine bays only)
• Popup headlights can be toggled on and off (for cars with popups only, duh.)

Below are the cars available in the collection according to their brands. The colours available for a car are mentioned below it's name which can be used as reference to what colours a car can be coloured to using the PaintMatic items.

Has 2 colours: Black, Silver
The items that can be used:
PaintMatic: Black
PaintMatic: Silver
More information on how to colour the cars and the list of PaintMatic colours can be found below in this article.

Has 1 color only (basically a slightly wider NSX)

Popups on (for NSX - ashminggu Special):

Popups on (for Eunos Roadster - Black):

a) The 2 exclusive special editions in this pack:

• How to color them?

(Due to MCPEDL image size restrictions, I couldn't upload the GIF here as the size exceeds the limit set by MCPEDL. The link above will send you to imgur.com where I've uploaded the demonstration GIF.)

• How to open/close doors/hood/popup headlights (Except AE86 Trueno)

To OPEN the hood, right click WHILE shifting/crouching WHEN the doors are closed and the hood will open!
To CLOSE the hood, right click WHILE shifting/crouching.
In a nutshell, the concept is basically;
Right click/hold + Shift/crouch = Close/open the hood/popups and close doors
Right click ONLY = Open doors and to get in car ... (once the car's doors are open)
NOTE: The following cars do not have engine bays therefore they don't have the ability to open hoods, but the doors can be opened/closed like all other cars.
Honda NSX-R Na1 (Both versions)*
Eunos Roadster*
Honda Integra DC2

*Popups can be turned on the same way as opening/closing the hoods of cars with engine bays (right click + shift).

• How to open/close doors/hood/popup headlights (FOR AE86 Trueno)

NOTE: For the AE86 Trueno (Hatchback and Coupe), the popup headlights can be turned on as well as the hood.
This is how it works for the AE86:
Right click/hold + Shift/crouch = Turn the popups on/off and close doors
Right click ONLY = Open doors and to get in car ... (once the doors are open)
Right click with Wrench = Open/close hood
Yes, to open the hood you'll need a Wrench (currently for AE86 only). This item can be found in the Creative Inventory by searching "Wrench".

You may refer the video below:

For users who plan on adding this pack into a world that already has an individual car addon applied to the world, make sure to EITHER:

i) Make sure both BP and RP JDM Legacy S2 packs are at the top of the list.

ii) Remove all the individual packs and replace it with this pack. [Suggested]

Don't worry, all the cars will remain where you last parked them. They will automatically update themselves once you open/close the doors/hood/popups. If you are a Mobile/Phone user, it is recommended to make sure you make a copy of the world before doing this as it may cause crashes/lag.

For users who plan on adding this pack into a world with the JDM Legacy Season 1 car pack, you may notice that there are a few similar items in the JDM S1 and this pack (JDM S2), specifically some of the PaintMatic items.

You can use the PaintMatic items in the JDM S1 pack with the cars in this pack (JDM S2) and vice versa as they are the same things so you don't have to worry about any incompatibilities between the 2!

Contact me through one of my contacts listed above and I’ll send a direct download link whenever possible, no Linkvertise restrictions!
This addon is exclusive for MCPEDL. Any other websites that distribute this addon without my approval are false and are an act of plagiarizing.