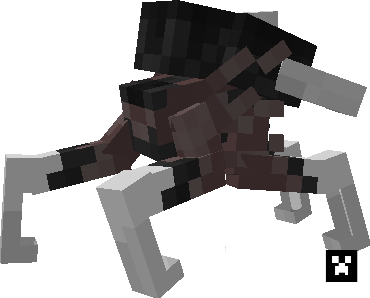 markus
17:15, 16 October 2021
171
0
Now creatures called Terramorphs will appear in your world. These creatures create hives and reproduce in large numbers. There are a huge number of types of these creatures, but the Queen and the King are the most dangerous. Try to survive in the world with these creatures..

Parasite
They have a small health reserve. can infect: chicken,horse,fox,wolf,cow,pig,sheep,rabbit,parrot,goat,cat,panda,donkey,llama,mooshroom,mule,polar bear  for the appearance of Terramorph.Spawn in the forest biome with a 5% chance.
Egg and Cocon
When the parasite infects the victim, it turns into a cocoon from which a baby terramorph will appear after a while.
Parasites appear from the eggs. When you get close to the eggs of the terramorphs they will give you the effect of nausea.
Terramorph Baby
HP: 4
Damage: 2
When a baby terramorph appears from the cocoon, then after 30 seconds it becomes Juvenile. A Juvenile becomes an adult after 1 minute (he can become a worker, a warrior,a tank, a prime or an elite).
Juvenile elites differ in appearance from other Juveniles.

Terramorph Warrier
Hp: 20
Damage: 8
Warriors are much stronger, besides they are poisonous when they bite
Spawning all over the world

Terramorph Prime
Hp: 40
Damage: 16
We can assume that the Primes are the queen's guards, they are very strong and they also weaken the enemy when I bite him.
Terramorph Tank
Hp: 65
Damage: 24
Tanks are huge, slow Terramorphs. They have a lot of damage and a reserve of health, because of their low speed, it is easy to escape from them, but if he bites you, you will slow down, which will allow him to catch up with you.
Terramorph Elite
Hp: 35
Damage: 18
Elite is a flying terramorph who in 20 minutes can become either a king or a queen.
A distinctive feature of this species is the ability to fly, when it receives enough damage, it will take off and start shooting  poison clots into you.
Terramorph Queen
Hp: 100
Damage: 30
The Queen is one of the most dangerous types of Terramorphs.
After 10 minutes, the queen will create a hive around herself and grow an ovipositor. Queens fight among themselves, finding out who is stronger.
This is what a hive of terramorphs looks like.
Terramorph King
Hp: 120
Damage: 35
It can also be one of the most dangerous types of terramorphs. Its main ability is to strengthen Terramorphs, it gives them regeneration, protection and increased damage. The radius of this ability is 20 blocks.
Also added armor made of terramorph scales.

1.download the addon
2.upload  to Minecraft
3.and enjoy the game