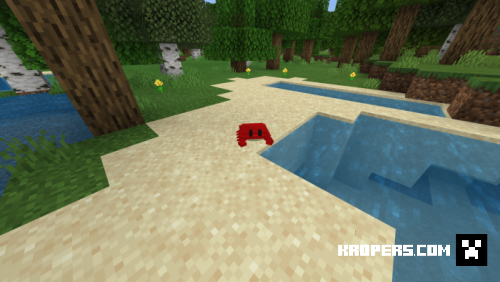 markus
18:52, 14 October 2021
107
0
Have you ever wanted more mobs in minecraft? Well your dreams has come true! This addon adds 9 new mobs into the game! This includes prehistoric mobs and much more!

Note: Keep in mind this addon is in pre-release so you may encounter bugs, if you encounter some bugs let me now in the comments section below and i'll try fixing it!

Showcase (Prototype version was showcased in this video)

As you guys saw in the introduction, this addon adds 9 new mobs into the game!
If you're asking, what are the mobs added by this addon? Good question!

This mob is nothing special, it just pinches you like a real life crab does

This one is nothing special either, it's just another type of a blaze but it can drop ice rods (Has no use for now).

This one can spawn in deserts, it's also nothing special xD.

This one can also spawn on deserts, it acts like the eagle so it's also nothing special.

This one is incredibly rare, it can only spawn when a eagle gets struck by lightning, it's also hostile so be careful!

This one is nothing special, it's just a hostile mob that spawns in jungles and deserts.

This one is also a prehistoric mob and is very beefy and hostile, it can knockback roar you and can one shot you with no armor, it's hard to kill this big guy (unless you have a ranged weapon).

The drops of the Stegosaurus and the T-rex!

This one is also a prehistoric mob, it's the same as the t-rex but more stronger!

And the last one! The Giant:

This one is from java, it doesn't spawn naturally so it's nothing special, it also has an AI!

In the full release, it includes 2 ice staffs! (Suggested by LeNoob).
Can be crafted with ice rods from the ice blaze
Regular Ice Staff:
Mega Ice Staff:

This one obviously spawns in oceans, it's super beefy and strong so be careful, but don't worry it doesn't spawn commonly and i'll consider it as a miniboss since it gives alot of xp!

This one is neutral, it's enemy are the sharks, you can also ride it! It also spawns in oceans and has the same chance of spawning as the shark!

Go to the Downloads Section, choose "Website Download" or "Mediafire Download". On the Website Download, scroll down to the Downloads Section and find the addon. On the Mediafire Download, just click the big blue button. Wait for the file to download, once it's done open the .mcaddon file with minecraft, once it's done exporting create a brand new world and apply the addon to your world! Enjoy and Goodluck!