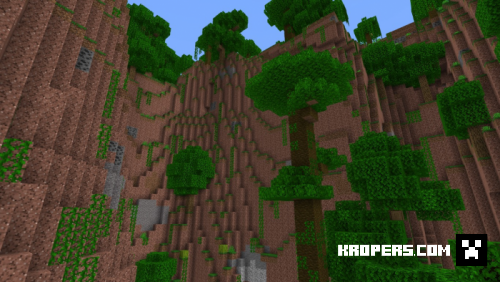 markus
20:24, 11 October 2021
134
0
TerraEnhance is an addon that adds 20+ new biomes to your Minecraft world, inspired by the likes of Traverse, Biome Bundle and Biomes O' Plenty! This addon does not add any new blocks, or mobs, in order to retain the vanilla feel of the game, this also means you can use any other biome addon with it, such as Expansive biomes, Ybiomes or bioplentia! The biomes in this addon currently include:

I have added co-ordinates for where you find all the biomes in this addon, the seed for the co-ordinates is - 799914970

The extreme Jungle Hills feature extremely large, erratic, mountains. Consisting of granite, dirt and coarse dirt, covered in a dense amount of trees, along with vines on the mountain walls. The Extreme Jungle is a sub-biome, which is much flatter.
Co-ordinates 215, ~, 5656

The Meadow Forest is a very flat biome with new oak, and birch trees, covered in dandelions, cornflowers and grass. Monsters will not spawn in this biome too, making this the ideal place for building a base. The meadow is a sub-biome, which will occur around the Meadow Forest, without the trees.
Co-ordinates -2832, ~, 4150

A dense forest biome, the thicket consists of tall oak trees and oak bushes, the floor is made of coarse dirt and rooted dirt. The Thicket hills is a sub-biome, which is slightly more mountainous.
Co-ordinates -532, ~, 4772

The Desert Plateau is more or less the same as the mesa plateau, however, consists of smooth sandstone instead of hardened clay, the height also is slightly different. The canyon is a much taller version of the canyon, which looks stunning from afar. Lapis Lazuli will also spawn in high amounts in these biomes.
Co-ordinates -1301, ~, 758

This is a variant of the forest biome, however, is covered in snow, often spawning near a tundra biome. This allows you to find oak and birch wood more easily when spawning in a tundra biome.
Co-ordinates 474, ~, 5249

The Glacier is a large plateau of ice and snow, with a few ice spikes on the top, this will transition into the ice canyon, a much taller sub-biome. This is the perfect place if you need lots of ice, and adds much more variation to possible snow biomes you can discover!
Co-ordinates 725, ~, 5232

Inspired by rock pools, the Mossy Shores consist of moss, mossy cobblestone and cobblestone, they are commonly found next to forests and Boreal forests.
Co-ordinates 557, ~, 6938

Forest Plateaus, are common variants of forests, which are the same, however, are significantly higher up.
Co-ordinates 653, ~, 6121

Deep rivers are much deeper, wider versions of the normal Minecraft rivers. Has a frozen variant.
Co-ordinates -1091, ~, 4494

Inspired by Yellowstone the Volcanic Taiga has the signature prismatic springs which can be found scattered on the surface. The biome consists of calcite, tuff and light grey concrete, magma blocks can also be found underground. The Volcanic Taiga Hills is a hilly biome that surrounds the Volcanic Taiga, it has custom spruce trees, with thin grey fog.
Co-ordinates -603, ~, 3125

The spooky forest is a Halloween inspired biome, it's a dense forest with yellow and orange leaves on the trees. Pumpkins can be found in high amounts, along with Jack O' Lanterns, giant pumpkins, cobwebs and mushrooms. Bats will spawn above ground, and witches will spawn more frequently, thick fog will also surround the biome, giving it an eerie feeling, The Spooky Forest Hills is a sub-biome that is hillier.
Co-ordinates 1434, ~, 1288

The flower plains is an uncommon biome that is very similar to the regular plains biome, however, flowers will spawn at a high frequency, the grass is also a much greener colour.
Co-ordinates 867, ~, 8984

The diverse forest is a forest biome that features: spruce, oak and birch trees, making it the perfect place to gather resources, flowers will also spawn in high quantities!
Co-ordinates -1242, ~, 4854

The fantasy forest is a rare biome featuring: huge flowers, mushrooms, lots of custom trees and extremely erratic terrain. This is my personal favourite biome, I wanted to encourage exploration, hence why I've made it rare.
Co-ordinates 490, ~, 865

The temperate forest is a flat biome featuring huge trees, along with giant pumpkins. It has thin orange fog and green spore particles. This biome has a fantasy feel about it too, the giant trees offer many exciting building possibilities!
Co-ordinates -2189, ~, 3923

Turn on creation of custom biomes, experimental toggle, when creating the world

I understand that not everyone likes linkvertise, however, it really helps to support me, and will help ensure that I continue to update this pack in the future :)