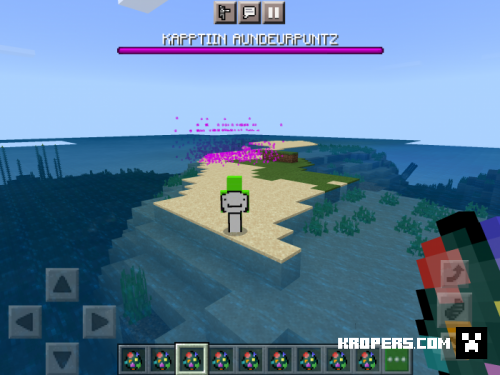 markus
23:37, 10 October 2021
103
0
This Addon adds a ton of ridiculous mobs, whether weak or strong. Meet that really big orange ravager from the featured image, whose name is Fire Ravager. If im talking about really strong, I mean that the Fire Ravager has 50000 hp. This addon’s sole purpose is to be in those battle videos of random Addon fighting, or you to have a good laugh with your friends.

Do you recognize this guy from a book? Yep, it’s Captain Underpants, now called KAPPTIN AUNDEUURPANTZ. He’s really evil, killing everything good in his way.

There are many dangers in this Addon, and heroes like Dream will help. He will wield his trusty rainbow sword(only if you turn on experimental gameplay settings) and slash at any enemy. Each slash deals 5000 damage so have Dream in your base. Sadly, the one in this Addon cannot MLG.
You know that those horror addons are really op? This Addon has FREDDY HORROR represent that. He’s evil just like in the games.
This dud is from the mobile game My Singing Monsters. He wields the Rainbow Sword as well.
Recognize him? Yes, he’s the now evil captain barnacles from octonauts
I swapped some photos, here’s the Fire Ravager