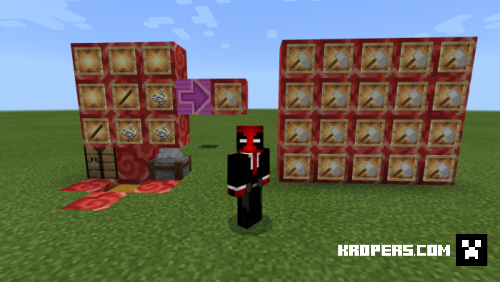 markus
23:33, 10 October 2021
99
0
Now with the new update catching animals and monsters is easier !!!, discover it now !!
Now you can capture unlimited mobs / entities and take them wherever you want, isn't it wonderful? You just need sticks and yarn and catch !, 99% compatible with many add-ons.

MobsCaptureV2 has arrived better than ever with its new update that makes it easier to catch animals / monsters as well as having compatibility with capturing creatures from other add-ons.


Functioning:
You may be wondering, how does it work ?, because it is very simple, you approach the entity you want to capture in a radius of less than 2 blocks and we hit the entity with the net and we will capture it.


As we can see, in addition to capturing the entity, it will drop us a message that will say which entities we capture if the entity has a nametag it will tell us the name of the entity, you can also capture several entities in a network.
To release the captured entities, we will only hold down the screen or right-click and release all the entities that we have on the network.

Crafting
For the elaboration of the primary spider web: You will only need 2 sticks and 3 of thread and place them in this position.

Observe that now the nets are spent both to release and capture animals and entities, it has 30 total uses!
Making the other nets: Simply place net # 0 in a stone cutter and voila, choose the one you want.


The other networks are for the other players since 2 players cannot use the same network since they will share the captured entities then choose another since there are 20.

You can capture any entity from another addon, guaranteed 99% compatibility with other addons and now it no longer uses the Player, you can put the addon wherever you want since it does not cause incompatibility