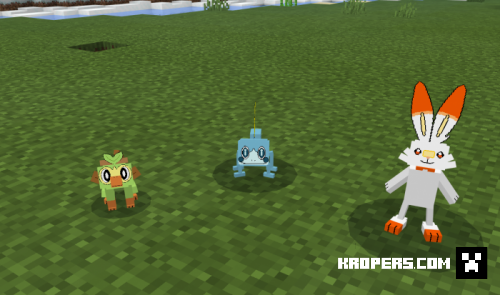 markus
21:09, 09 October 2021
256
0
Welcome to Craftmon - Galar
This addon promises to bring the power of the Galar Region to Minecraft.
Hunt down you favorite Pokémon and battle with friends.
Your Pokémon adventure begins now.

This addon will allow you catch, collect and breed Pokémon from the Galar Region.
Only Pokémon from the Galar Region will in this addon.
This addon is based around a MMORPG, Certain aspects may seem strange but are designed to act as money sinks.
When returning your Pokémon to its respective ball, you will recieve your Pokémon but not a ball. This is by design.
All Wild Pokémon can be caught with any type of Pokéball
2nd stage Pokémon can be returned to a Great ball
Last stage Pokémon can be returned to a Ultra ball

Wild Pokémon will drop random items when killed. The most common being Pokéballs and Pokécoins.  You use the Pokécoins to buy various items from a Rotom Mart.
Rotom Marts can be made with a simple recipe
The Rotom Mart will sell everything you need to help you in your world. When you are finished with the Rotom Mart simply tap it with a League Card and you can collect your Rotom Mart

Pokémon evolve through timed evolutions, Each Pokémon will have a different growth rate. You can speed up this process using Rare Candy.

Master Balls have been added to the addon, They can be bought from the Rotom Mart. As they should they have a 100% catch rate for any Pokémon.

Camping Tents
It's now time to pitch your tent and make some soup.
The tent (When Up) will give out it's own light so you don't have to cook in the dark,
The tent will act as some protection from hostile mobs, Zombies, Skeletons and Spiders will avoid camp sites, if a skeleton does start shooting from a distance
they will just hit the tent rather then you (when your inside).
You place the Tent (closed) on the floor and tap it with the Tent Hook,
This will open your Tent, tap it again to take the tent down.
The cooking Pot can be used to make your own Soup (More recipes will be added as the addon grows).
Rare Candy Soup

Use the Crafting Table provided to craft the Soup Recipes.
Don't forget to light the fire before using. Tap the Empty Pot with a torch and the fire will start, The fire will only last 30 seconds unless ingredients are added.
Tap the empty pot (now alight) with a Soup Bag and the cooking will start.
Cooking Rare Candy Soup will take 4 minutes, When the cooking time is up the spoon will stop stiring and a Rare Candy will be released from the pot.
The pot will then reset and you can start the process again.
Bluk Berry Soup has been added to the Cooking Pots Recipes, Simply craft a Bluk Berry Soup Bag and you will cook 4 Bluk Berries in 4 minutes

MAX RAID DENS
Max Raid Dens will now spawn your world
You need to interact with them using a Wishing Star.
Any fully evolved Pokemon that is in the addon can be a Raid Boss.
Wishing Stars can be found in Dropped Pokéballs or Pokéball Crates
When you interact with a Max Raid Den it will spawn a Dynamaxed Pokemon at random, Use your Pokemon to take down the Raid Boss. Be careful the Raid Boss
will hit back so it might be wise to bring a Healing machine with you.
Each Raid Boss has 5000 HP, So it will take a while to be taken down. If you do not defeat them within 5 Minutes they will return to their Den and you will need to start the process over again. If you do defeat them they will tranform into a catchable form of themselves.
You will know this because they will turn black & white.
When they are in this form you can catch them using a Premier Ball, Only a Premier Ball can be used on Raid Bosses.
When you have caught it you will be rewarded with a ton of loot for your troubles plus the Spawn egg of the Pokemon itself.
You have a 1 in 4 chance for that spawn egg to be a SHINY.

When you activate a Max Raid Den it will become Dormant for 5 minutes, after 5 minutes it will turn back to a usable Den but without the pink beam of light.
When it is in this stage you can re-activate the light using a Wishing Star or wait 10 minutes for the Den to become fully active again with a Beam of light.
Premier Ball Recipe
The Gaming Machine
The Golden Corviknight Slot Machine has been added
You can get one from the Rotom Mart by purchacing a Gaming Machine Reciept and placing it on a Crafting Table
To use the Gaming Machine insert a Pokecoin and watch it spin, when the spinning has stopped you will see if you have won.
If 3 Pokemon have lined up your a winner, Interact with a
Coin Case to collect your Pokecoins
Any 3 Pokemon in a row will pay out 3 Pokecoins
If you find 3 Golden Corviknights you win 50 Pokecoins
Shiny Sparkles for all Shiny Pokemon

Install both packs to be able to play this addon