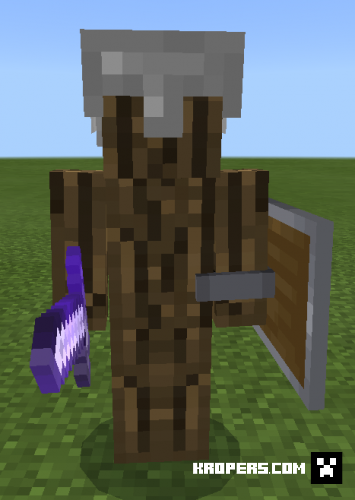 markus
20:54, 09 October 2021
139
0
You find it difficult to play alone when the game has too few allies. This add-on will solve that.This addon will add to the game several allies made of wood and stone. It will be very easy to craft because the necessary materials are easy to find.

Woodman is a soldier made of wood, possibly a golem. It has high mobility, medium damage and 50 health. Woodman often fights in groups with other Woods.
Tame the woodman with a wooden plank. Maybe an apple.

Woodranged is a ranged and crossbow-equipped golem. Woodranged has high mobility and fairly low damage. Use woodranged in large quantities to be more effective.
Woodranged can be tamed with oak boards. maybe an apple.

Woodtrident is a true Marine. Because it can fight both on land and in water. When near it will stab the trident on the target, when far away it will launch the trident.
Woodtrident can be tamed with oak boards. maybe an apple.

This is a stone golem with 2 wooden arms, has high damage but not as much health as an iron golem. The speed is quite slow and not maneuverable.
Can be tamed with cobblestone.

Shootarrow is an automatic arrow-shooter, medium range, medium rate of fire.
Just put it out can work.

Woodcar is a car made of wood. There is a fast running speed, low durability, 4 seats, and the Woods can drive and sit.

Stonecar is a large vehicle made of stone. Has high durability, is not damaged by long-range attacks, has 7 seats, medium speed, can destroy trees to pave the way.

How to reload cannons:

DON'T NEED TO TURN ON ANY SETTING EXPERIMENTS