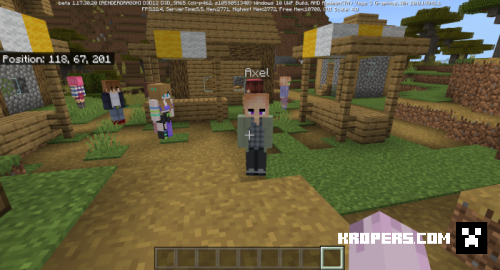 markus
20:25, 08 October 2021
69
0
Have you ever wanted villagers to look a little more... human? Personally, I haven't. But playing on a world alone can get a little boring at times, so this addon aims to spice that up a bit. Inspired by the Minecraft Comes Alive mod for Java edition, this addon replaces villagers with randomized humanoid villagers that are more fun to interact with!

To start off, you have to find a village (Obviously). When you do, you won't find normal long-nosed villagers, but villagers that look more like players. As I said before, they all have randomized skin, hair, and outfits, plus their own names, so there are over a thousand different looks!
When you walk up to a villager, instead of a trade button you'll see a talk button. Pressing it will open up a gui for you to talk with the villager. There will be three different options when you first talk to them.
The first option, talk, will open up three different things to say to them. Your relationship with them will go up or down depending on what you say. As of now, this is randomized.
When your relationship level with a villager reaches 15, an new option, "Flirt", will appear in the talk menu. Flirting will increase your relationship with them more than just talking, but it can also decrease your relationship by more.
When your relationship level with a villager reaches 30, another option, "Follow" will appear in the base menu. Press it to make the villager follow you, and press it again to make them stop. This only works in survival mode as of now.
The second option in the base menu, trade, is exactly what it sounds. When you press the button, close out of the gui, and instead of a talk button when you look at them, you will see a trade button like normal villagers have. Each villager will have it's own profession, though it isn't shown. The third option, gift, Isn't implemented yet. In the future, this will be used to give gifts to villagers, bringing your relationship with them up or down, depending on what they like. Lastly. you can find eggs to spawn them in the creative inventory. Spawning a normal villager will just replace it with one of the new ones.
Along with replacing villagers, wandering traders are now replaced. They are randomized like the villagers, excluding their clothing. As of now you can only talk and trade, but more interactions are planned in the future.
Planned Updates:
-More Interactions
-New Zombie Villagers
-Witches / Illagers?
-More hair / outfits
-Name / outfit easter eggs
-Even more!