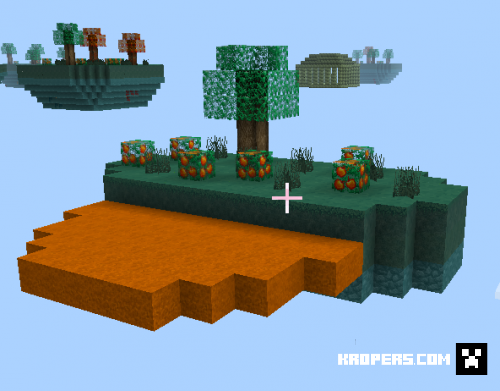 markus
16:08, 05 October 2021
103
0
The Sky World Addon is an addon that adds an infinitely generating sky lands above the overworld. It features new bosses, ores, and weapons. This will give an optional experience above your overworld to mess with.

Firstly, the sky world itself. It generates infinitely above the overworld in small islands. There will be mostly large islands with trees, grass, and ores. Some smaller islands will have burntsoil: blocks that when stepped on, grant fire resistance. There will also be bushes on islands that can be harvested for their sun berries. Also, please keep note that regular hostile mobs will still spawn on these islands at night.

There may be different tower islands, dungeon islands, and rock masses. Some islands may have a dragon resting on it that will awaken if gotten close to or interacted with. Other times, there will be rare structures that will feature the main bosses of this addon.


Here is the temple where the Skystone Golem will reside.
Here is the Angelic Temple where the Throne Master sits.
Here is the Hellfire dungeon where the Hellfiric Dragon waits.
Here is the Mossy Uphold where the Ancient Risen Zombie stands.
Here is the nest island where the Sky Dragon rests.
Here is sun oak which only drops glowstone dust.
The ores and materials of this addon include stuff like red quartz, sun stone, and sky crystal. No materials from the regular overworld will work on the harder materials like stone here, so it is best to start by mining a tree and working your way up.
When you mine an ore, the drop will depend on what tool you're using.
Example: sky log breaks sky stone, sky stone breaks sky crystal ore, sky crystal breaks sun stone ore. Red Quartz is a crucial material used to make torches and smelt items. Both sky crystal and sun stone ore will be blocks that will both be needed to be smelted in order to obtain their actual material.


Another thing that can be made is a gun. It is called the aergun. It is a weapon that has a large cooldown that shoots bullets that causes targets to levitate. It may have no requirement for ammo, but it only has 350 uses before it breaks.

The new mobs in this addon can be difficult to deal with.
One new mob is the Sky Gust. A gust of whirling wind that causes any entity nearby to levitate after touching its gust. A simple hit will get rid of it.

There are some wildlife that appear on these islands. They are pretty much the same as their groundly animal counterparts. They include the sky cow, sky pig, sky sheep, and sky chicken.

A mob that can appear here may occasionally fly to the overworld. That would be the aerpheonix. These are powerful sky birds that attack you by drilling towards you at a scary speed. They will drop a dragon's breath bottle once killed, so they can be useful in that regard.

The sky dragon is a boss that rests at its nest. If a player comes too close or interacts with it, it will wake up, cause a loud roar that summons a thunderstorm, and then proceed to attack any nearby player after flying up into the air. It will summon spikes, summon meteor showers, summon homing attacks, swoop to attack, and shoot fireballs all to attack its target. On defeat, it will drop a ton of bones, some dragon's breath, and some sky crystal.

The throne master is one of the rare bosses that resides in an angelic temple. It will perform melee attacks, summon wither skeletons as minions, cause large shockwaves, and perform powerful scythe swings that knock away many targets to attack. Upon defeat, it will drop to the floor and drop a feather used to make a particular weapon.

The Skystone Golem is a rare boss that resides in an enclosed temple. It will perform slowing melee attacks, smash the ground to cause a huge knockback, and summon evoker fangs on targets. It hits heavy with a ton of health, but will drop a cross on defeat to make a certain kind of weapon.


The Hellfiric hydra is a large beast located in hellish temples. It will switch from biting its target to shooting at its target. It can summon a ton of harmful evoker fangs around itself and summon flames that home in on you. It will put up one of the toughest fights. On its death, it will drop its heart that is used to craft a powerful weapon.

The Ancient Risen Zombie is found at the rare mossy upholds. He is slow, but will cause a levitating effect when hitting you. He'll stomp the ground to summon lightning, summon chained evoker fangs, and cause a powerful roar that sends targets flying. On death,, he will drop a gem that makes a brilliant weapon.

Onto the weapons that the artifacts from the bosses can be used to craft:
Each boss drops a unique item that is used to craft 3D weapons with their own abilities. They are even enchantable.

Lastly, the music discs:
These items are sometimes dropped by the bosses of this addon. They are used by using them in place without a jukebox.