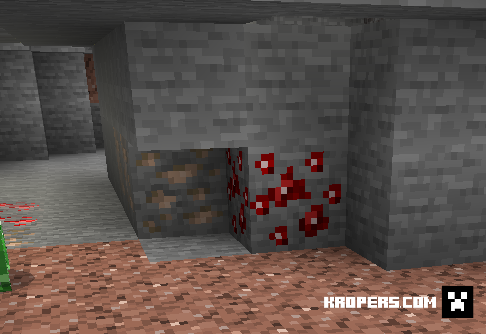 markus
12:52, 02 October 2021
145
0
This addon brings back the old scrapped ruby with a twist. The ruby seems to have some sort of fire-like abilities. It may function differently than what you may initially expect.

Rubies are now an ore found underground. They need to be mined with at least an iron pickaxe to get a ruby shard from them. 4 ruby shards will be used to make an entire ruby.

Rubies by themselves don't have their own armor, but instead enhance diamond or netherite armor. You just take a ruby and your armor piece together in crafting, and the armor will be enhanced by the ruby, giving it knockback resistance and extra durability.

Rubies can also be used to make a ruby great-sword. This is a huge sword that deals 10 damage and can shoot out powerful fireballs at the cost of 50 durability.

If you surround a diamond with ruby shards in a crafting table, you will gain an ancient ruby core that could gift you when used.


There are also 4 new bosses. These bosses will appear randomly throughout your world in ruined areas.

The first one is the fire knight. The fire knight is a humanoid with a slow movement speed but with high damage output. It will stomp the ground fiercely, summon fire geysers, and shoot out a large fireball. Upon defeat, he will break and disappear.

The next boss is the fire snake. The fire snake is a large horned snake that slithers at fast speeds to bite you. It will burrow into the ground and become intangible for a while til it comes back out and slams the ground. It will also shoot a large fireball and use a quick tail slam. Killing it will cause it to roar one last time and disintegrate.


The next boss is the fire naga. It is based off the myth of the flying serpent. This giant beast will be found flying around in your world above a random structure. If it has a target, it will stop to contest it and fly around it. It will shoot out fireballs. It has a swoop attack that is extremely deadly to those nearby his swoop. They also have a roar attack which gives slowness and wither to entities in a large radius. Defeating it will cause it to spin into nothing.

The last boss is a fire dragon. It will be sleeping til disturbed. It actually has a ground phase, a flying phase at half health, and armor granted to itself at quarter health. When its ground phase, it will constantly switch between shooting out fireballs and biting its target. Its flying phase is when it will swoop the ground to attack, summon tons of fire geysers near its target, and do a massive fiery roar that deals tons of damage to everything caught within its area. Defeating it will cause it to explode and disintegrate.

That is so far what this addon has to offer. It will be updated in the future with more features such as a fire staff or ruby golem. I hope to expand this more. There is even a youtube video for it:

First there is the ruby bow. A powerful weapon crafted from the regular bow recipe, but jus with rubies. It requires ruby arrows which can be crafted like normal arrows but with rubies. You need to hold the arrows in your offhand to be able to shoot the bow.


The rubeic territories have been changed to have this new look and also have their subjective and proper structures spawn inside them only.

The new Ruby-Great-Pickaxe was added. A pair with the sword, this pickaxe is a fast mining tool that can be used to summon fire geysers in open-land areas.


There are a multitude of new bossed that you can fight, including:
Devil's Mouth:
Firic Spider:
Rubeic Skeleton:
Wild Red Dragon:
Ruby Abomination:
There is also a new ruby witch. These are neutral mobs found in the rubeic terrtories. They put up a bit of a fight, but you can get rubeic spell books from them.
There are two new armors: ruby armor, and studded ruby armor.
Ruby armor is just a little bit better than iron, whilst studded ruby armor has less durability but more defense.
There are new discs as well. These are gathered when any type of skeleton kills a fiery creeper.
There is a new dimension as well. By taking a ruby and throwing it into a corner of a portal set up by Rubeic frames, you can make a portal to the rubeic dungeons. Nothing but a huge labyrinth that leads to the ruby abomination at the bottom.

Install pack. Put pack into world. Make sure world has settings "holiday creator features", "creation of custom biomes", and "additional modding capabilities" all enabled before starting world. If it crashes: go to world settings first, take the pack out, back out of world settings and re-enter, and then put the pack back in again, then re-enter the world.