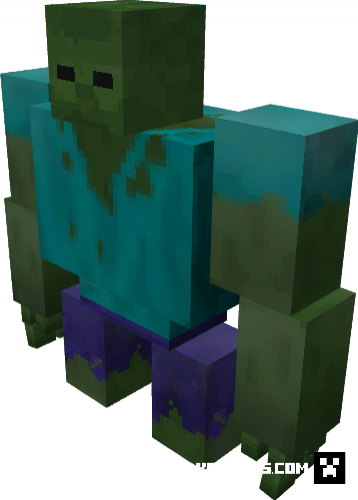 markus
12:42, 01 October 2021
95
0
This addon adds a new boss to the game, probably equivalent to a Bedrock wither. Even a full netherite armor cannot protect you! Mua ha ha ha ha!!   Any ways, I hope this new boss is challenging for you, it has 2 special attacks so be careful.

This video explains it all, if you watch it, you won't need to read the things below ?

The boss won't spawn naturally, it is similar to a wither, you will have to spawn him. To spawn the boss trap a zombie, throw a potion of strength on the zombie and then interact with a flint (Flint, NOT Flint and steel). Once the boss has successful spawn, it will start with it's presentation of power. The boss deals 10 hearts or so in his per hit, so be careful, even a full netherite armor won't protect you.

The boss summons 8 - 10 Zombies around it-self and command them to attack at you. Some of these zombies may have geared stuff such as iron swords, Iron helmets, golden armor etc. Or maybe they won't have anything, the real challenge would be of night time. Because of night time none of the zombies would die from the sun, which means double trouble.

The boss will stomp the land so hard that the land between you and the boss breaks down dealing a whole lot of damage to you. This also means that you cannot use the stack blocks up and attack trick, cuz the blocks beneath you will be broken and instead of you hitting the boss, you get fall damage. Keep this boss away from villages, he hates villagers and iron golem in comparison to him is like an ant.
I tried to take a picture but as it was so fast this is what I was able to capture as a proof:

On killing the boss you will get a special zombie flesh(Disgusting ?), which will give you some muscular strength  including: Strength, Speed, Jump Boost, Resistance and any one of Poison or Hunger
A slight possibility of dropping a zombie boss skull, which when you wear, all the zombies around you think you are the boss and attack FOR YOU. Basically you will become immune to zombies and will gain more punching damage ( +4 Damage with a 0.8% chance of poison fist )
It can also drop diamonds or netherite ingot (0.4% chance) with an xp bounty of. . .some what more than or equal to a wither's xp