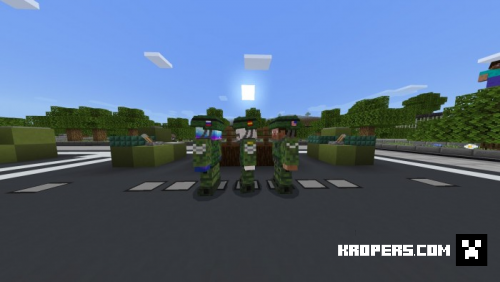 markus
14:37, 28 September 2021
153
0
This is a large 3D Military Uniforms Pack that can be used for Minecraft MilSims / Roleplay maps. We've decided to create this for our own MilSim maps and decided that it should also be made public as well. The uniforms are 3D Modelled and there is nothing alike on MCPEDL. It also has 24 different country flag helmets meaning the MilSim can be for many nations. We may add more helmets in the future if the demand is high enough.

Some Uniform Pieces can be used for multiple ranks. Such as the combat leggings which are worn for all ranks from Private to Major. Same thing with other, boots, and helmets

Note - These ranks are based of the UK's armed forces, but are similar for almost every nation

Officer Uniforms for ranks Officer Cadet - Major:
Berets are a Separate Addon that we have made on MCPEDL