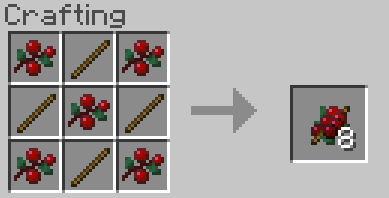 markus
18:44, 22 September 2021
189
0
Greetings fellow human beings, and welcome to the world of Prehistoric Rift! This addon aims to expand upon the gameplay of Minecraft by adding prehistoric creatures and enhances the vanilla experience!
Before playing with this addon, turn on commands, holiday creator features, and additional modding capabilities before playing with the addon.

These food items are needed to tame and breed the creatures in the addon. Different treats work on different mobs, so try play around with them and see

This item is required to utilize the special abilities of your mount. Use it while riding to see what happens!

This item allows the creature you're riding to harvest certain items at a higher efficiency than by hand. Different creatures can harvest different items with varying efficiencies. Some creatures may even extract resources from certain blocks!

This item allows you to use machines that are attached to the saddle of the creature you are riding, if there are. For example, cannons!

aka the main attraction of this addon :D

The Tyrannosaurus can be found in the plains or mountains. It’s neutral most of the time, but every once in a while it will attack anything it deems to be food. In order to tame it, you need to kill a wild Tyrannosaurus for a chance to get an egg. Be careful, as they may utilize their powerful roar to knock you back if you attempt to attack them, and they will inflict weakness 2 on most surrounding mobs!

Once tamed, its command staff ability is to let out a roar that will knock back most mobs and destroy blocks weaker than wood!

The Stegosaurus can be found in plains biomes grazing alongside other Stegosauruses. Don’t aggravate it because it is capable of killing most mobs in one hit. They can be tamed with berry treats, rooted treats, and grassy treats.
Once tamed, you can use the harvest staff to make them harvest grass fiber from grass, obtain more crops than you normally would from farming them, and convert flowers into dye!
But whats more is that they can charge up their regular tail stab attack for more damage! With a drawback of course, being a long cooldown.

The Dodo is essentially a dumb chicken except that it doesn’t drop any eggs. You can just put them in a pen and breed them with berry treats.
Their meat however is quite special. When cooked, they will grant you absorption.

The Triceratops is a friendlier version of the Stegosaurus, like, you can go pat them in the wild. Don’t aggravate them because they’re quite fast and will not take you lightly. They can be tamed with berry treats, rooted treats, and grassy treats.
Once tamed, their command staff ability is to go into a rage mode where they will be faster and can charge into blocks weaker than wood and mobs. You can also use the harvest staff to make them harvest thatch from logs, and lots of saplings, and leaves from leave blocks.

Utahraptors can be either found in packs hunting or hiding in the forests. Once a pack spots a target theres a chance that one of the pack members will activate a pack buff to grant swiftness and strength to its packmates. You can tame them however by sneaking up to them and giving them flesh treats over time.
Once tamed, you can power jump way higher than a horse would, and you can even pounce onto other mobs. The command staff allows them to use the pack buff but only for other tamed Utahraptors. Finally, you can climb walls with them! Just jump while looking up to latch yourself to a wall, then look up while holding jump to climb up! To climb down, just look down and press jump once!

Apatosauruses can be found in the plains biomes in small family units. They are one of the strongest herbivores in the addon so far, as they can simply stomp over small mobs and babies and can smash blocks weaker than stone by walking through them. The adolescents that may accompany them are untameable, so you have to kill adults for a chance to get their eggs.
Once tamed, you need to give them a special saddle known as the Apatosaurus Platform to control them, which can be crafted as shown:
To make the best out of it, you can attach either any one of the available stationary weapons to an Apatosaurus with a platform.
The cannon allows you to fire explosives at far away targets. You need to fill them with cannonballs first for them to work.

The mortar fires explosives high up in the sky so that they will hone in onto far away mobs. You need to fill them with mortar shells first for them to work.
The catapult hurls massive boulders that deal massive damage and can paralyze the target. You will need to fill them with catapult boulders first for them to work.
Once you have attached a weapon of your choice to an Apatosaurus, you can activate them by using the command console!
Also, in case you attached the wrong weapon to your Apatosaurus's platform, you can remove it by using the wrench!

Parasaurolophus can be found in groups in plains and savannah biomes. They very passive, but if one member of the group spots a carnivore or gets attacked, all other nearby Parasaurolophi (if thats the correct plural form lol) will run away.
Tamed Parasaurolophuses have two command staff abilities which you can change by pressing jump. The first one allows them to scare away most mobs, like animals, monsters, and even Utahraptors. The second one makes most nearby mobs attack you, including the normally passive animals. Just note that its ability may not work on mobs from other addons.
Tamed Parasaurolophuses happen to turret mode by making them stand up, sneak, and right clicking on them while using the command staff. In this state they will scare away monsters, animals, and carnivores every 10 seconds.
You can also use the harvest staff to make them harvest crops, flowers, and most importantly, truffles from grass blocks.

Dimetrodon is a neutral carnivore that can be found in swamps or in deserts. The sail on its back gives it different abilities depending on the biome its in.
In hot biomes (deserts, badlands, the nether), it wil go into frost mode, which lets it turn any liquid it touches into solid!
In cold biomes (anything with snow except the extreme hills biome for now), it will go into flame mode, which makes it immune to fire and lets it set fire onto anything it attacks!


Once it exits the biome that granted it the temperature mode it was in a while ago, it will stay in that temperature mode for about 90 seconds before turning back to normal.
The taming method for the Dimetrodon is the same for the Utahraptor, except that its somewhat easier as its neutral.
You can manually change the temperature mode of a tamed Dimetrodon by using stimulants.
The flame stimulant lets it stay in flame mode for 8 minutes. Can be crafted with blaze powder, cooked exotic meat (from most of the mobs in this addon), a truffle (can be harvested by parasaurs from the grass), and a bowl.

Coelacanths are boring fish that spawn in the oceans. Not much else can be said other than the fact that their meat isn't good for consumption.
Their meat however can be turned into crude oil, which happens to be a good fuel source. The oil can be also smelted to make plastic frames, which are needed to make plastic furniture.

Megapiranhas are small aquatic fish that spawn in nearly every body of water except for outside the edges of the oceans. They are very aggressive to anything that swims in the water as long as it is not another water predator. Though weak on their own they can be devastating when they're in a group.
There's barely any use for them other than the fact that they're pests, so make sure to kill them as soon as you see them.

Sarcosuchus can be found in the rivers and swamps, swimming about and attacking anything that steps into the waters they dwell in. They happen to have a regular attack and a devastating spin attack that deals a lot of damage and slows down whatever it hits.
They can be tamed and ridden in both water and land, though they're cumbersome in the land at best. Also, Megapiranhas are scared of them, making them the best repellent against such pests.

Anomalocatris is an aquatic invertebrate that can be only found in the coral reefs. They remain invisible in their wild state, so you have to hit them when you see invisibility particles in the water all of a sudden, or see a fish die all of a sudden. Due to this, it is impossible to capture pictures of them hanging out, so here's a random model screenshot for now.
But anyways, its possible to tame them, and when you do, you can use their invisibility cloak to hide in from drowned. They can also grab mobs with their appendages, so you can capture random mobs at the surface or the edge of the water to drown them or to attack them.

Eggs can be obtained thru breeding or through killing Tier 3 mobs. You can pick them up by sneaking and right clicking (tap and hold for mobile).

Why did I add furniture to a dinosaur addon you may ask, well this is my addon and I do whatever I want with it.
Anyways, to start making furniture, you need to find loot sacks. Loot sacks are dropped by carnivorous creatures, and come in 4 rarities. The items required to make furniture, the blueprints, can be found in loot sacks of uncommon rarity and rarer.
Next, you need to craft a furniture bench, which is crafted as shown here:
Place down the furniture bench and interact with it while holding the blueprint to put the blueprint on top of it, and then place any wooden plank or a plastic frame to make the furniture you want!
Also, the furniture tool can be used to change the shape of tables.
Currently there are only chairs and tables, but more will come soon.

Turn on commands, holiday creator features, and additional modding capabilities before playing with the addon.