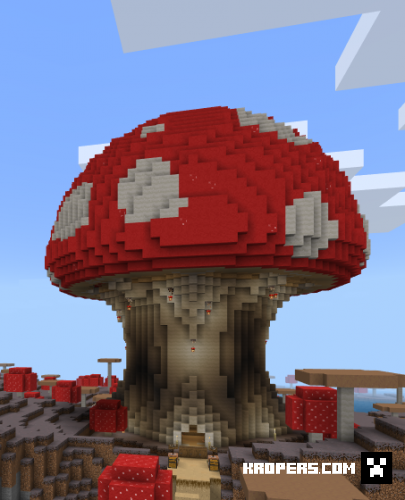 markus
18:10, 19 September 2021
203
0
This add-on features one of the largest and most detailed temples ever added to Minecraft. With dozens of different room types to explore, enemies to fight, items to collect, and a full-fledged boss battle, this add-on is an exciting addition to any survival world!

Just a quick note, I've really enjoyed working on this add-on and have put a LOT of time and effort into it. I hope you all like it!

Gloom and Shroom is a very mushroom-focused add-on designed mainly around the enormous and complex Mushroom Temples that can be found throughout your world.

Every temple has a randomly generated interior similar to a mineshaft or stronghold. They're somewhat rare, but their rarity can be adjusted in the Behavior Pack options menu. In these Temples, you can find various mobs, decorations, items, and even a new boss with an original boss theme. Also, as a bonus, I have made a showcase world that you can download alongside the add-on if you want to easily see everything included with this add-on.

As a reminder, be sure to enable experimental gameplay for this add-on to work!

^ Red Mushling ^
^ Brown Mushling ^
The most common mobs found in Mushroom Temples are the Mushlings. While not very dangerous by themselves, one should not underestimate their power when in numbers. They can briefly cause nausea with their headbutt, which can be very disorienting if you are hit repeatedly. Mushlings, however, will mistake you for a fellow mushroom if you're wearing a mushroom cap. While wearing a cap, you can tame them with bonemeal or rotten flesh. They are decomposers, after all. Once tamed, their cap can be dyed any color. When killed, they have a low chance to drop their respective color of Mushroom Cap.
^ Mushling Sentry ^
^ Mushling Sentry Sprout ^
Mushling Sentries are immobile turret-like mushrooms that fire lasers at the player on sight. When the player gets too close to the Mushling Sentry, it will hide under its protective cap until the player gets far enough away. Just like Mushlings, the sentry will mistake the player for a fellow mushroom when they are wearing a mushroom cap, but they cannot be tamed this way. Instead, to get a tamed sentry, one must grow it from a Mushling sentry sprout (These can be found in chests or dropped by enemy sentries). When grown from these, they will be friendly to the player and hostile to monsters. Their cap can also be dyed. Be careful to grow them with bonemeal, as you may accidentally dye them white when they are fully grown.

Last but very not least is the Doom Shroom. The Doom Shroom is the first boss of this add-on, with several more in development for future releases. He's the biggest and baddest of all of the mushroom mobs and will easily clobber you if you're unprepared. The Doom Shroom has several different attack patterns that he switches to throughout the boss battle. He punches, smashes, stomps, spins, and even fires his arms out like missiles before growing them back. Once defeated, he will drop a pair of his signature Doom Shroom Gauntlets and allow the player to break into the treasure room of the temple. I tried my hardest to make the Doom Shroom feel like an actual boss battle. I even orchestrated an all-new theme just for this fight.

The Gloom and Shroom add-on includes a whole host of blocks, including several mushroom-themed decoration blocks such as the mushroom slab, mushroom gills, two colors of wall mushrooms, mushroom roots, and the mushroom lantern. Mushroom Roots can be farmed with bonemeal.
Another farmable block is the Mineshroom. They are mushrooms that act like land mines and grow to adjacent blocks when put underground, just like red and brown mushrooms. Be careful when harvesting them...
Lastly, we have the mini-mushroom. When planted, it looks just like a smaller version of the regular red mushroom. However, given enough time (or bone meal) and space, the mini-mushroom will easily distinguish itself by growing an entirely new dungeon! This allows you to potentially create a mushroom temple closer to home if you can't find any nearby.
This add-on also includes several functional blocks as well in the form of Mushroom Barrier Blocks. When unpowered, they act like any other block. However, when they ARE powered, indicated by the glowing yellow cracks, they are indestructible. They surround the treasure room and can be broken once the boss is defeated. They can be reactivated by the player by the use of the Mushroom Barrier Power Source. This block can be obtained from treasure room chests or by crafting.

In the temple, you can find the previously mentioned brown and red mushroom caps as well as golden mushrooms and their respective stew. The golden mushroom acts like the golden apple and gives the user strength and absorption. It can also be crafted into a new and more powerful suspicious stew. This stew grants the player a random set of powerful enchantments. It's like a really beefed-up version of regular suspicious stew.
The Mushroom Staff of Transformation, or just Mushroom staff, does what its name implies; when you bop a monster on the head, they will turn into a random Mushling. This does not work on bosses, however.
The next weapon is the Mushling sentry eye. It can be found in chests and allows the user to fire lasers just like the sentries it comes from. There's not much more to say about it ...other than it's really fun to use.
The last and most unique of the weapons in this add-on are the Doom Shroom Gauntlets. These are dropped directly by the Doom Shroom himself and allow you to attack the same way the boss does; you can deliver a powerful punch and fire them out like missiles. I have not tested this out with a touch screen, though, so it may act a little strangely on mobile devices.
All of the weapons above can be repaired with their respective mushrooms at an anvil if they're about to break.