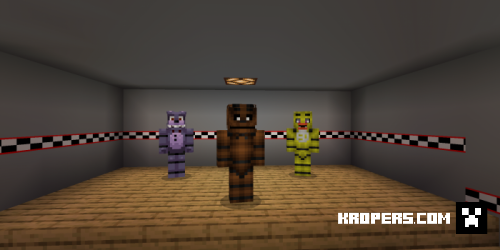 Its your First week at Freddy's, and you've been tasked as the Night Guard. You think the Animatronics won't harm you, think again. At Night (or any time since I can't make them attack only at night) they will unleash their vengence upon you thinking you are their murderer when they were alive. Can you survive till the end of your Minecraft World?

This is my First Add-on and I hope you all enjoy it. I first uploaded this to my YT Channel W.D.Gaster Gaming and it barely got noticed so I'm sending it here to be noticed if I'm able to send it through the verification system. This is the second version. The first version included Freddy Chica Foxy and Bonnie and the 3 blocks. In the images below is a preview of what this mod is about. The fnaf Add-on here took me at least an hour or 2 to create and did you know a blocks side has at least 32 by 32 pixels on it? I didn't till I created this. Version 2 added Golden Freddy, Puppet, and also retextures the birch door to allow us to be see through. This is the most detailed way i can explain this add-on.
Freddy Bonnie and Chica and their Stage
Foxy and his Cove
Marionette aka Puppet aka Charlie in her box
Golden Freddy aka Cassidy