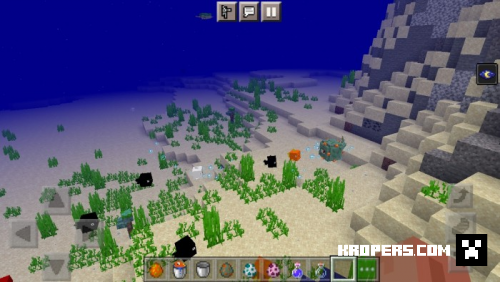 markus
17:04, 15 September 2021
82
0
Have you ever dreamed about your own pet fish, that will help in aquatic adventures, that will guard you? It's comes true - now in rivers of vanilla Minecraft you may found new type of fish - Goldfish! And also this add-on adds flying fish - Flish.

Goldfish
Goldfish - is a friendly mob, that as I said will be found in rivers. They have six variations and will attack illagers and gusrdians (they hate them), also you can pick up them in to the bucket. Goldfish - are the only fish, that can live with axolotls, so you can make general aquarium with them ?
Goldfish breeding with caviars. To breed goldfish you need to use heart of the sea, and then you'll got a caviar. After some time little fishy will hatch, and grow itself. (NOTE: Caviar must to be in water, or it'll dry out and die)
With goldfish in game will be added raw goldfish, cooked ones and bucket with it (NOTE: Yes, behaviour of bucket same with Arkcraft ones, but I didn't steal it, I just use the same AI to make it).
You can also tame cats with raw goldfish.
You also can tame goldfish, with using seagrass or kelps and then you'll get a useful aquatic pet!
But that's not all - you can make it super powerful, if you wear a crown to it.
Crown is a new item, that you can craft (recipe higher), and wear it to your goldfish. If you do it - your pet will get regeneration and health boost effects, that makes it very strong. To unequip crown, just click on goldfish with crown, holding a crown.
You can wear a crown too, but you won't get any effects - it's only for your pet fish!
Flish
Yeah, the flishes from the "The Future is Wild" series, now in your Minecraft world. You can found them hovering and gliding in ocean biomes.
At first sight, they looks like to the birds, but they are fish, fish, that can breathes air, fish, that can fly, like a bird.
Main flish's prey would goldfishes, that aren't in water, so that means, that they will attack goldfishes, that on land, or that ones, that jump out from save aquatic world.
Flishes also can pick up raw goldfish in their "beaks", and then eat it.
The only bug with that add-on, flishes sometimes don't flying. They're just stay on ground and moving very slow.