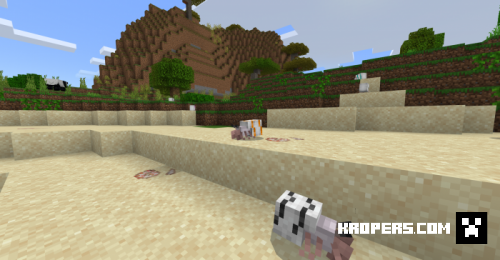 markus
22:02, 14 September 2021
2
0
Beaches in Minecraft are pretty plain. They pretty much only have sea turtles that sometimes rest on the soft sand, but that's pretty much it. Me and some people discussed about some cool new ideas for the beach biome, so we thought adding hermit crabs were the best choice. Here it is:

Hermit crabs will spawn in all beaches except stone beaches. They will also spawn in warm oceans and coral reef biomes. Hermit crabs prefer their own home beach rather than inland, so you will not find them wandering off into forests or other biomes.

Hermit crabs are known for their defense against predators, that means hermit crabs will hide in their shell for 5 seconds when hit by the player or any mob. They are buffed with resistance during this state, turning them pretty much invincible.
This skill is very useful especially against their natural predators, the dolphins.

Taming a hermit crab as your pet is easy, they eat a variety of food such as:  apples, carrots, beet roots, golden apples, golden carrots, kelp, cod, tropical fish, and rotten flesh. After taming, your hermit crab will follow you everywhere. You cannot sit them, but they will effect you with resistance when you're in battle.
Hermit crabs come in 13 different shells. Original, Prismarine, False Nautilus, Red, Neon, Green, gray, Magenta, pink, golden, turtle egg, zebra, and emerald. Out of all, the green "Emerald" is the rarest.

Hermit crabs will not drop anything upon death. Tamed hermit crabs will drop a shell, only if the shell had been given by the player. Shell giving is a function I'll explain soon.
Mixed sand is a new block that is used to provide the players with a way to find sea shells on the beach. Breaking it will drop a couple random colored sea shells. Throwing a sea shell to any hermit crab will cause them to swap their shell color.
Sea shells can also be found in ship wrecks, ocean ruins, and buried treasure. Sea shells can be held in your off hand slot just like nautilus shells.

Make sure to turn on experimental gameplay and custom biomes. Turning on caves and cliffs cause the mixed sand to not generate.