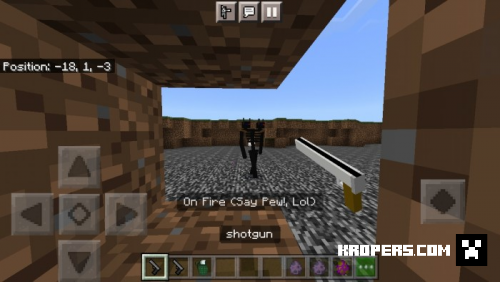 OR ELSE THE ADD-ON WILL NOT WORK!

The New Born Titan Enderman
This entity have no abilities! he can only walk and wander, but if you hit it so much he will gonna punch you immediately lol.
------
Gun Man
He can shoot shotgun bullets, he is a friendly mob he can kill monster and mobs! also he will gonna beat the titan enderman if you summon a lot of them!
------

He is the boss He will gonna kill mobs and villagers ( and you to ), beatable but you can't beat it easy cuz he will destroy you fast! he can yeet mobs lol, he can summon clones and ender guardians!
He's so strong really strong!
--------

This mutant enderman is really strong he can roar and he can throw some Blocks and He can summon clones, this entity is beatable you can beat it easily not too hard cuz this entity is still on BUG 92%, It will be continue When I delete something items.
Some Screenshots
ENJOY it if you get the add-on.
------

This One Is strong Too! He will gonna smash Players and mobs, he can summon lots of clones! He is beatable mob but you will never can beat it easily Cuz it's too hard!
Some screenshots
----------

This one is REALLY SO STRONG! HE can beat you fast ! to beat this one ( highest weapons requirements ) Also He will gonna throw lots of blocks and Ender Balls! he can summon clones!
------

This one is strong too he can summon lots of clones and Ender guardians! he can you beat you easilly! to beat it ( highest weapons and shotgun requirements)!
-------

3D Sword ( Press it to release the power)

Using this item you can be able to throw blocks, by pressing the item.

I add some texture the gun man spawn egg!

OOPS! Delete The old version Of it before downloaing the file!!!

Download the the Mcaddon file by clicking the add-on link USE the perfect add-on VERSION to run the main controller of the add-on!