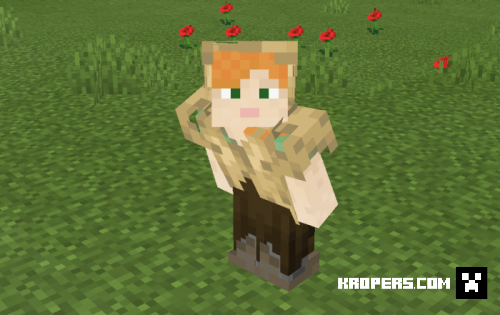 markus
19:05, 06 September 2021
109
0
Were you disappointed by Minecraft 1.10, the Frostburn Update, the update that added husks, strays, and fossils? This addon expands upon the features added in the Frostburn Update to make them more interesting to play with.

Bones can now be crafted into all of the standard Minecraft tools. These tools are not particularly powerful, but they have much more durability than iron, and fill in the gap between iron and diamond tools. Bone tools are more enchantable than diamond tools, but not quite as much as gold. They also make the satisfying bone block breaking noise when you use them.
Bone tools do not follow the normal tool recipes. Instead, each recipe includes a bone block to make crafting it slightly more expensive. The recipes can be found in the recipe book.

When they take damage, husks have a chance of dropping a new item, husk fibers.
Husk fibers can be crafted into armor. This armor is between the levels of chain and iron armor, and it is decently enchantable. It is crafted using the standard armor recipes, which can be found in the recipe book.
Husk fibers can also be combined with awkward potions in a brewing stand to make fire resistance potions.

Strays are wither skeletons who were banished from the nether. The portals they used became ruined portals. If you take a wither skeleton to the overworld it will become a stray, and vice versa. This is a good way to get wither skeleton skull if you don’t have a fortress nearby.
I didn’t really come up with much lore for husks, other than that their husk fibers are what make them not burn in the sunlight. If they lose enough fibers, they will begin to burn in sunlight.

Husks now have a chance to drop a husk fiber upon reaching 80%, 60%, 40%, or 20% health. Each time they change, their texture also changes.
When they have less than 40% health, they will burn in sunlight.
Husks also now have more health, but cannot spawn with armor or weapons.

Wither Skeletons now convert to strays when brought into the overworld, as that is what happens according to this addon’s lore.

Strays no longer have bows, they now shoot Powder Snowballs.
Strays also now convert into wither skeletons when brought into the nether, as that is what they used to be according to this addon’s lore.