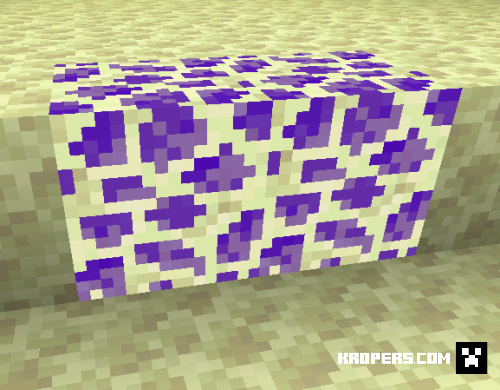 markus
22:43, 05 September 2021
159
0
This addon adds a new ore to find, new weapons and armor to make, and new enemies to kill! Explore your world, fight a boss, and discover a new way to craft exclusive potions!

The new ore in this addon is voidium, a rare-ish ore that spawns in the end!
You can mine this ore and get pure Voidium, which can be combined with various resources to make a voidium ingot!
After you get the voidium ingot, you can surround a sword, or any armor piece to get voidium gear! The armor has infinite durability and insane protection and knockback protection! The sword had infinite durability and does 12 attack damage!
There is a new boss called the Piglin Warrior! He shoots fire balls, summons magma cubes, and can be found in the nether! He also drops a weapon called the Gilded Greatsword that does 12 attack damage
There is a new mob that spawns in the end called the Vaze! It drops a Vaze Rod that can be used in the new brewing Table!
This next mob is the albino ender man, a rare type of Enderman that doesn't teleport but has a lot of hp and does a bunch of damage! Once you defeat one, you get an albino ender pearl, which travels faster then a regular enderpearl!
The next mob is the evolved Shulker. It spawns in the end and in the new overworld biome and is very hostile so be careful. It also had a chance of spawning with endstone gear!
The next new mobs is the Void Bull! It drops the new dark Bone item and has 100 hp!
With these bones, there is a new way to craft wither skeleton skulls!
The next mob is called the Void Phoenix. It is like a phantom but it can spawn anywhere, any time but only in the end. For now, it doesn't drop anything, but it's still a beautiful, and dangerous, mob to see!
There is a new biome in this addon! It is generated in the overworld and is called The End Forest. This biome has a new type of tree and even a new type of planks, slabs, and stairs!
Reinforced Endstone isa new block and item that can be crafted into armor!
With reinforced endstone, you can craft new armor and a sword! It is crafted like any diamond, iron, gold, or leather gear!
Another new item is the end bow! It is a bow with infinite ammo that allows you to teleport around!
One of the major aspects of this addon is the new Brewing Table, a crafting table like utility item used to make potions!
With this, at the moment you can make 2 potions, the levitation and haste potion!
Vaze powder (purple dust) is made just like blade powder but with a Vaze Rod instead of a blade rod!

The last thing in this mod is a new potion called the potion of the void! It gives strength 2, speed 2, night vision, and haste 3 for 2 minutes! It is crafted in a brewing stand with a potion of instant harming.

UPDATE V1.0.3
In this update you get 6 new potions that can be made with the brewing table and a sapling for the end tree!
The sapling can be crafted like this (NOTE: the sapling may appear invisible untill placed)
Now, onto the new potions!
The first one is the resistance potion, which gives Resistance 2 for 90 seconds
The next one is the saturation potion which takes away hunger effects, and allows you to not eat for a bit!
The next potion is the bad omen potion, and if gives the bad omen effect for 100 minutes!
The next potion is the hero of the village potion it can be brewed with a bad omen potion and gives 90 seconds of hero of the village!
The next potion is the Trick Potion, it has the same texture as the regeneration potion, but gives wither 2, slowness, poison, blindness, nausea and hunger. It's brewed with a regen potion!
The last potion of this update is the purifier, which takes away all bad effects other then hunger. But, it is hard to make and requires a trick potion!