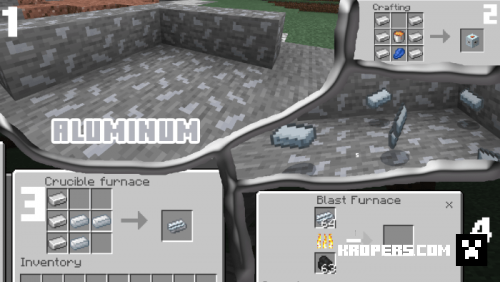 markus
20:54, 03 September 2021
107
0
SpacePE is an addon for Minecraft Bedrock, which adds space to the game. Currently it contains 4 terrestrial planets with something like custom dimensions and many space blocks, items, ores... Let's go into space!

First, we need a spacesuit. To create it, we need new ore - aluminum, iron, and a new furnace - crucible! In a crucible furnace, you can create an alloy of aluminum and iron. After that, the resulting ingot must be melted in a blast furnace - and the material is ready!
There are only a few items left to make - an Oxygen Gear, an Oxygen Helmet and an Oxygen Tank. Next - you need to make armor from alumiron. Follow the crafting in the picture! To activate spacesuit, equip it on you armor slots.
Fine! Now we need a rocket. First, let's create a launchpad from blocks of aluminum. Then we will create a moon rocket - you can see this process in the screenshot - and we get a rocket to go to the moon. I'll talk about other rockets later. Stop, we also need fuel! There are 2 types of fuel - igniter and regular fuel, which is faster than igniter! For flights to distant planets, it is better to use faster fuel!
When you get into the rocket, hit the block with fuel - you will fly!

After launching the rocket, you need to fly to the height (it depends on the planet), after which you will teleport to something like a dimension for the planet. After a short flight through space, you will find yourself in the lander, which will take you to the planet! Each planet has its own skybox - a background for the space atmosphere. Now let's get to know the planets!

350 blocks from the Earth

To fly to the moon, you need a moon rocket that we have recently created. This planet is the first in the addon! It is smaller than all other planets. It consists of lunar
regolith and soil, as well as two new ores! The first - cheese - can become food! Just melt it down to furnace. The second - sapphire - is capable of more! Firstly, you can make a sword out of it - it will do 6.5 damage, and secondly, you can make a hammer with which you can become rich - look at the screenshots!

To fly to Mars, we need a Mars rocket. To create it, combine the moon rocket and sapphires in the crafting table. Mars is far from the earth, so it is recommended to use fuel to fly there - igniter is too slow.
Mars is a planet larger than the moon! The gravity on Mars is greater than on the moon, but less than on earth! Mars is the first planet on which an evil boss will await you. Find him in the dungeon under the regolith and you will see a huge zombie doing massive damage!
However, after winning, you will receive a treasure chest - there you can find a super potion, many rewards and ... A redstone heart!
With it you can make the heart of the station! For this heart, we need to create libraries (cores) that will charge it with power! The heart of the station works like a beacon: it gives you effects.
But there is a new ore on Mars - a ruby, from which you can make a sword (it will do 7.5 damage) and a drill! For the drill, you need new ore that can be obtained from meteorites that are falling all over the place! Smelt the meteorite piece and you will receive its ingot.
Then, with the help of meteorite ingots and a ruby tip that can be made from rubies, you can make a drill. From rubies you can make an interplanetary tunnel that will move you quickly! And from meteorite ingots, you can make a tube for food - putting food there, you will restore a lot of hunger!

To fly to Venus, you need a Venus rocket. Use the rubies and the mars rocket in the crafting table to get it! Venus is closer to earth than Mars, but fuel is still recommended to use - igniter is too slow.
Venus is the largest planet in the addon! There are volcanoes on the surface of Venus that are supposed to spew lava, but they don't... So, under the ground of Venus you can
find a dungeon with a difficult boss - a skeleton! He will shoot very quickly, but by defeating him, you will receive a treasure chest - there you can find fuel that is faster than all the previous ones - supersonic fuel! There is an ore on Venus - Venus (yes, that's the name of the ore) that you can make a buggy from - thanks to Bananji for the model! You can also make a sword from venus (it will do 9 damage)!

To fly to Mercury, craft a Mercury Rocket from Venus Ingots and a Venus Rocket in the crafting table. Mercury is far from earth - it is recommended to use the supersonic fuel you got on Venus!
Mercury is currently the last planet in the addon. It has a mountain system. Its dungeon is narrow, and there you will find a large spider - in addition to melee combat, it can entangle you in a web!
Defeating him will give you a Spider Staff - an item that entangles enemies in cobwebs! You can find a new ore - topaz, and make a sword out of it (it will do 10 damage)!

As I said, you land on planets in a lander.

To return to earth, you need to create an earth module - its crafting recipe is shown in the screenshot. When you want to return to the Earth, just climb into the lander and use the earth module (use right click or longtap) - and soon you will land on the Earth by parachute.
Sceptres are a new tool that can be crafted from all alien ores! First, we need an
aluminum stick. You can see the craft in the screenshot! Then we can start crafting scepters. A sapphire scepter slows down enemies, a ruby - heals you, venus - sets enemies on fire, topaz - sends them into the air, and a meteor - summons lightning, but stuns you!

This concludes the description of the add-on, but there are many more interesting things in the add-on! Alien mobs, sapphire blocks, lander and more!