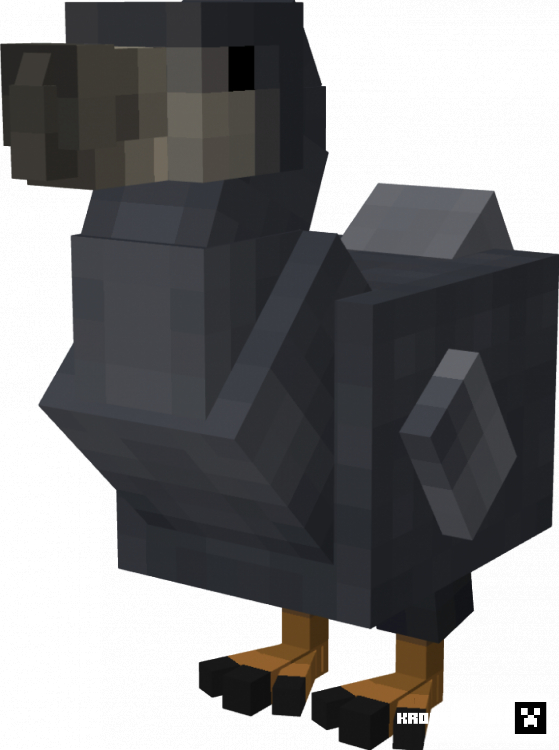 markus
20:07, 02 September 2021
239
0
Dodo Add-on adds a simple thing, Dodo!
Dodo is an Extinct Bird that only lived in one Island near Madagascar. They became extinct when sailors landed on the Island and started adding Pigs & other livestock.
365 MEGAVerse is a Series that follows the Story of 9(2) or Kyuu Anticipation Desperation. The Series is full of Questions to behold, and has been Written as a Fascinating Story that will be Anticipated by the Main Character, but will also Forget.This is a Small part of the Main Add-on called the “365 MEGAVerse Series Add-on”.

Will only Follow you holding Seeds
Can be tamed using the following Items:
Sweet Berries
Glow Berries
Beetroot
Potato
Carrot
(Other Fruits & Vegetables only available in Main Add-on)

Sittable!
Will now follow you when holding Tameable Items
Starts Following the Owner when 5 metres away.

has 50/50 chance of hatching Baby Dodo
Rare chance getting Twins!

Use Male Dodo's as a Food Source of Meat,
while you can use Female Dodo's to produce More Eggs!

Dodo's aren't scared of anything, the reason is because they never had to, until Humans Arrived.
They're Curious & Friendly, they can fill your Stomach but their meat doesn't taste splendid.
Dodo's can be found in Warm Beaches in groups of 2-6
Foxes have a chance to hold Dodo Eggs & will eat any lying Raw or Cooked Dodo
Fletcher Loot can have a Dodo Egg
Throwing Dodo Eggs are not as far as Chicken Eggs
You can't be crafted for Cakes, Pies, or any other egg related Ingredient needed, reason is because... Well, do you want to taste your Cake or Beaver Pie to be like burnt Fruits & Shells?
Wild Wolves will Kill Dodo's while you can feed your tamed Wolves Raw & Cooked Dodo
Butchers will want to trade Raw Dodo's

Preview Image of Next Add-on

Enable the Experimental Options with: