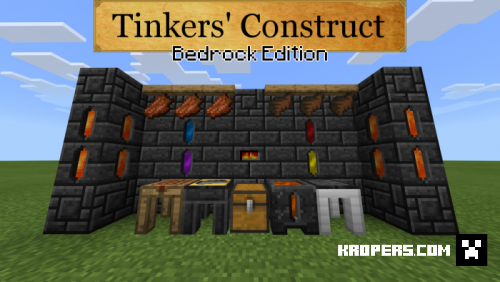 markus
16:36, 31 August 2021
327
0
Tinker's Construct is a Java Mod, first created by mDiyo and progwml6, now recreated in Bedrock Edition! This add-on adds new tools and weapons to the game, with many different combinations of materials!

This add-on adds 6 new tools and contains 64 different combinations! The materials which can be used are Wood, Stone, Flint and Iron, which are recreated to the best of my ability and maintained to be used in 1.17! More materials are planned to be added in the future, like Copper, Cobalt, Ardite and Manyullyn. The tools currently in the game are Pickaxes, Hatchets, Broadswords, Longswords, Shovels and Mattocks.
But first to create these tools, you will need some workstations.

This block is required to make different patterns.

This block is required to make parts for tools.

This block is used to combine the parts to make the tools.

This block is basically an upgraded Tool Station, which will soon be able to make better tools, like the Cleaver or Hammer.
Now let's see the different tools you can make.

"The Pickaxe is a basic mining tool. It is the simplest method of chewing through rock and harvesting ores." -Skyla
This tool is the Tinkers' equivalent of a pickaxe.

"The Hatchet is a basic chopping tool. It is the simplest way to shape lumber." -Skyla
This tool is the Tinkers' equivalent of a vanilla axe, however it is able to efficiently cut through leaves without taking durability.

"The Broadsword is a defensive weapon. It is a favorite of many Tinkers and is useful in a wide variety of situations." -Skyla
This weapon is the Tinkers' equivalent of a vanilla sword.

"The Longsword is an offensive weapon. It is used for full-speed charges and plowing through enemy lines." -Skyla
This sword is less powerful than the broadsword however, it is able to send you forward with the lunge mechanic.

"The Shovel is a basic digging tool. It is the most common way of moving earth around." -Skyla
This tool is the Tinkers' equivalent of a vanilla shovel.

"The Cutter Mattock is a versatile farming tool. Its primary purpose is to till soil. It also works somewhat like an axe and a shovel, but is not a replacement for either." -Skyla
This tool is a combination of an axe, shovel and a hoe however, it cannot mine all the things that those tools can.

This feature is needed for making tools with metals and alloys. It is somewhat different to its Java equivalent as it doesn't need a fixed shape, but it can still be used that way.

This block is needed to make seared bricks and is crafted with gravel, sand and clay.

This item is used to make Seared Bricks, or major components of the smeltery.

This is mainly a decorative block, and its appearance can be changed by placing it in the crafting grid multiple times.

This block is the main component needed for a smeltery and requires one lava bucket to activate it, which will last for 9 smelts. It is able to smelt at least 2 of the same material at once. It is able to smelt Iron, Copper, Cobalt, Ardite and Manyullyn. The molten metals can be obtained with a bucket.
The back of the Smeltery Controller shows what is being smelted.

This block is essential for the smeltery and allows you to make casts and metal parts, along with ingots, using the molten metal buckets.
Alternatively, if you are unsure on how to craft the parts, you can use a Simple Casting Table, which shows all of its recipes.

This block is used to make blocks of the molten metals, by pouring 9 buckets of the material into the Casting Basin.

This block can be used to store lava or any molten metal.

Because of the freedom to build it in any shape you want, it may be difficult to find a decent shape for your smeltery, so here are some ideas that I have thought of.

This is the usual smeltery that you would see in Java Edition and it still works in this version. The space in the middle can be another place to store lava, along with the tank.

This is a quick smeltery to make if you don't have many resources.

This is a large smeltery if you have a lot of resources and are willing to use a whole wall for your smeltery.

This is another small smeltery if you don't have many resources but it can look like a beam if you live in a house with a high ceiling.

As mentioned previously, Cobalt, Ardite and Manyullyn are 3 new materials added and will eventually be used to make tools.

This is a rare ore which is found in the nether, and is found between Y levels 0 and 64.

This is also a rare ore which is found in the nether, and is found between Y levels 32 and 128.

This is made by combining Cobalt and Ardite together, either in the Smeltery Controller or in a Seared Tank.

This block is used to dry raw food and rotten flesh and turn it into jerky. It will take around 5 minutes for each food to dry. Currently, the foods which can be dried are Rotten Flesh, Raw Beef and Raw Porkchops. More will be added in the future.

To get access to all the features, make sure to tick these boxes.

If you would like to see the durability of your tools, like the original Java Mod, I would recommend to add a durability viewer resource pack onto your world too.

Just click and install, no ads!
.zip files are also an alternative for iOS Users.