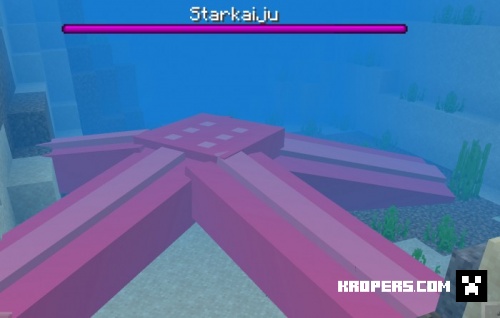 markus
20:49, 30 August 2021
168
0
In this Addon over 30 new mobs are featured! Meet Dinosaurs, Sea creatures, Birds, and even Feyd from the Gameknight999 series. You can tame new friends, fight new foes, and even craft the legendary Sword of Stars.
Also, thanks to Ferdino Lous and Fares Koura for their models and animations

Mobs
There is a plentitude of variant mobs so I will only list the primary mobs.
Starfish
These star-shaped curiosities may seem dull, but never let them get hit by lightning. Or else…

Starfish
HP: 4
Starkaiju
HP: ???
Attack: Dragon Fireballs
Zombie Pal
Get your own Zombie Pal. Feed it Honeycomb or honey bottles and it will defend you. It will shoot fireballs at passing enemies,
HP:20
Attack: Small Fireballs
Super/Hyper Zombie
These boss zombies will crowd in zombies making them a tough foe.
HP:100/150
Duplicator
The duplicator is a weaker version of the skeleton. But don’t undertake them! They will multiply very rapidly and you will need to stop them as soon as possible.
HP: 5
Attack: Arrows
Birds
All birds share the same behavior besides one fiery threat. They cannot attack the player.
HP: 10
Feyd
I have a Gameknight999 Addon but of course it‘s missing some points. This Addon adds Feyd, the Enderman king who succeeded Erebus. You can recognize him by his reddish hue.
HP: 300
Other Mobs
Explore the Addon and discover the properties of many other mobs!

V.2
Meet 4 new mobs, including 3 new horrifying aquatic bosses including the Sea Devil boss, which is a mutated Mantaray. Other bosses include the Thorn of the Seas and the Creep of the Depths, powerful aquatic bosses. There is also a 4th straight up buff of the Hyper Zombie, the Mega Zombie. It has a fearsome 250 HP and increased attack and summon. I’ve also nerfed the Duplicator’s duplication speed and increased the sizes of bosses.