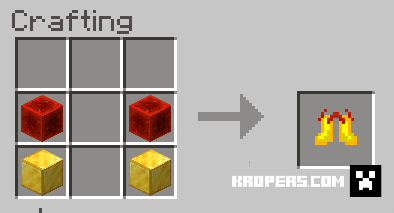 markus
20:27, 30 August 2021
96
0
Do you like running? Although running in Minecraft only benefits you to save time, but do you want your run to be destructive? If so, then you're in luck. Introducing the "Dash Boots".With the power of super speed and chaotic energy within these boots. It can leave a trail of destruction to those in its path. Each boots has different unique abilities and can be charge just by sprinting. These boots not only works with entities,it also works with players. Suppose they're not wearing the same boots.So what are you waiting for?these boots ain't gonna wear themselves.

MAKE SURE TO TURN ON ALL OF THESE :

Charge : Fast
Power : Normal
This is the normal Dash Boots.You need to craft this first before unlocking other dash boots.
dashing an entity will flung them into specified location

Charge : Normal
Power : Weak
create an ice cube that surrounds your target.Quite handy for trapping any mobs you like to keep

Charge : Normal
Power : Weak
Ability : Slow Falling effect
These boots do no damage to mobs.creates a cloud platform when walking on air.Jump and Sprint to charge the boots.

Charge : Normal
Power : Average
Creates a puddle of honey that has wither effect

Charge : Very Slow
Power : Weak
Same usage as the Cloud one. But Cheaper. and difficult to use. Sprint and jump to activate flight. To cancel, you need to turn off your sprint mode.This causes the rocket to deactivated and turn on hover mode.On hover mode,you gain slow falling effect and you can't activate your flight mode.hover mode will be turned off if it hits the ground while flight mode does opposite.

Watch this gameplay to know how the boots works(Old Video)

it works like Vanilla boots.Simply put your dash boots in your armor slot.

That's it for the Description Hope you Enjoy :)

1.Open your Download files
2.Search the Addon
3.Change the text from "zip" to "mcaddon"
4.Tap the file and open it in minecraft