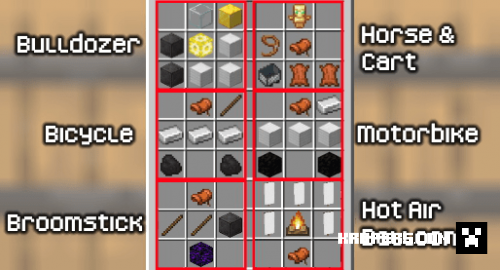 markus
20:23, 30 August 2021
76
0
A to B baby! For all your transporting requirements we have here bulldozers, two dirtbikes, hot air balloons, blimps, bicycles, three types of planes, a chopper, flying broomsticks and ... horse and cart! You know, the usual things. And, don't forget the Death Trap; build one for your friends today.

The Death Trap:
Planes and Choppers:

To obtain any of these things, you have to craft the right sort of package (e.g. bulldozer-in-a-box!), place it down, and then destroy it. A spawn egg will drop and the fun will commence. Most require a 'magic motor', recipe below. If you place it down (it's a light source as well) you'll need a silk-touch pick axe to pick it up.

Expensive, that's for sure (those grey blocks are netherite blocks, yikes). Slow (ish) and powerful, these things can bust through just about everything. Including... bedrock. Yes, not sure if this was a good idea or not, but, there it is. They come in a variety of colors and when destroyed, they do not drop a spawn egg, so you'll need to build a new one. Or just cheat it back, I won't tell.

Ideal for heading out for that camping trip with your buddies. Terrorize the villagers with sounds of your 2 stroke madness. They do have a small inventory, perfect for that shulker box full of camping gear. They don't drop a spawn egg when destroyed. Not that expensive though (note the black blocks are coal blocks.)

All-new (i.e. almost the same) for 2021! Not as strong, but generally a bit faster and can jump a bit higher.

OMG, so boring. (I'm actually a cyclist, I shouldn't be saying such things! Blasphemy!) They are cheap, come in a variety of colors, and they do drop a spawn egg, so, there's that.

I don't know what the plural of these things is. Neither do you, stop pretending. They do not drop a spawn egg either. But you can ride them (and take a passenger, I believe, at least I meant to add a passenger, might be a job for version 2), and they have an inventory.

Peaceful, and very pretty but OH SO SLOW. Repair them with wool/string. No spawn egg from these things so be careful. Look up to fly up, look down to fly down.

So expensive. They will drop a spawn egg, so, that's pretty neat. Have fun gathering the required amount of netherite! (The purple block is crying obsidian.) Look up to fly up, down to fly down. Just like the balloon. Just not as pretty.

Take up to two of your friends on a fun plane ride! If you fly too slowly, you'll drop from the sky!

Very cool! Again, you need to maintain speed or you'll stall and fall.

Like the above, but for people who don't want their hair all mussed.

What it lacks in safety it more than makes up for in cheapness and fun, fun, fun. If you're watching and not participating.
Don't look down Steve!

You want one of these! Who wouldn't?!

Who doesn't love blimps! Now you can have your own, and they don't even explode (I feel we've missed an opportunity here.....). Four seater!

Updated so bulldozer could crush 1.17 blocks such as deepslate, tuff, copper, etc.