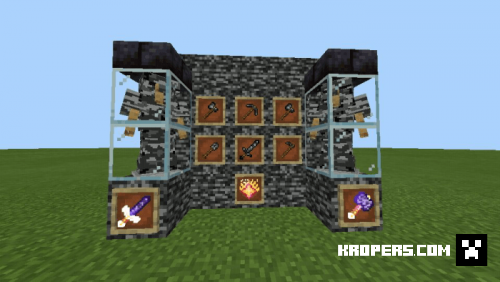 markus
16:02, 30 August 2021
151
0
A new set of armor and tools, an insta-mining universal tool, 2 powerfull weapons and the best part unlike other addons WORKS ON EVERY SINGLE BLOCK!!! If you want more equipment to your survival world this addon its for you

This addon adds a new set of armor and tools that unlike other addons works ln every vanilla block and most part of the blocks from other addons, and also 3 special items, all thinked for a post-dragon game. Make this take me a lot of time testing block so I hope you enjoy it

Before you can create anything you will need craft some bedrock, there's two ways of get it, but both requieres have found the end portal, the recipes are shapless so you only need put the materials on thr crafting table to get the bedrock, once you craft some you can get armor and tools.

This is the normal bedrock set, have 4 armor piecies and one of each tool, the armor provides the same protection as diamond or netherite but has more gives you more knockback resistance, makingyou imune if you wear the full armor, the tools are faster than netherite and do 1 more damage, all are unbreakable. The recipes of each item are the same that the iron set, just using bedrock intead of iron, however if you need the exact recipes just use the recipes books inside the game, the recipes apear there as you can see on this image. All the tools works like vanilla tools, shovels can create dirt paths, hoes create farmlands, axes unwax copper, etc. Also all the mining tools can mine a 3x3 area, to change the mining area just interact with any block while sneaking.


All of this items can be enchanted and works on every vanilla block, whe used on blocks from other addons can have strange behaviors dependig of how the blocks are coded, if this happens look the two tutorial in the end of this article to learn how to fix it.

Apart of the normal set there's 3 items with special characteristics that this addon adds.

The ultimate tool, this item it's able to insta-mine every block, can have the same enchantments that a pickaxe, if you use silk touch with it you'll be able to get leaves and web without scissors, for tall grass and similar you still need scissors. You can mine a 1x1 , 3x3 or 5x5 area, this works like in the other bedrock tools. There´s two ways to use it, you can insta-mine vanilla blocks like normal, in this way if you have any enchantments this will affect the drop of the mined block, but not the surrounding blocks, if you´re using a minig area bigger than 1x1, if you interact with a block or this is mined for the extra mining area it will break instantly, no matter if is an unbreakable or from other addon , but you the enchantments wont by applied, this is because addons limitations, the only exception for this area command blocks, structure blocks and barrier blocks; for obvius reasons you can´t mine any of this in survival even using this tool

The most powerfull weapon, this sword do 14 points of damage without enchantments, being able to kill most part of the mobs on two hits, also has the ability of summon lightning bolts wherever you aim by right clicking or keeping the screen pressed, this attack it's very precise, however, using a bow or hitting the enemy directly with the sword you'll do more damage.

This is the only item of this addon that doesn't requiere bedrock to be crafted, it has two modes , to change beetween each other just interact with any block

When using tools and block from diferents addons there's some problems that can apear, if something like thhat happens you can use this tutorials to fix it,
Before start: For both cases you'll need some tools, some device have this function included, in some of the you'll need dowload extra apps, so check it before start.
Tools needed:
Slow mining speed: If you have problem with the mining speed of a block follow this steps, depending of your device you could need some extra apps