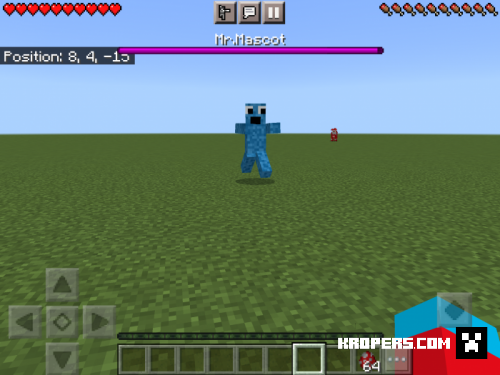 markus
19:37, 29 August 2021
129
0
The costume man is one of the monsters made by trevor Henderson. This Addon adds him to your Minecraft world. Craft the spawn egg with a head and blue wool in a t-shape for his spawn egg.
You will need to turn on experimental game settings to use this Addon.

The costume man(Mr. Mascot) carries a hefty 1000 hp and 60 damage. But he has a rather low range where he starts to chases you. Mr. Mascot is very dangerous once spawned as he will immediately as soon as spawned. Try matching him up with Xa-Tul from my Gameknight999 Addon.
He will attack you on sight and you can identify him by the boss health bar that appears once he’s in range. You can only beat him if you have the best weapons you have like netherite material and a TON of potions and enchanted golden apples.
Try pairing this Addon with other Trevor Henderson addons. The siren head Addon by Bendythedemon18 is a recommendation.
Mr. Mascot in Desert
Mr. Mascot spots a cow
Village invader
There will be more mobs added soon.