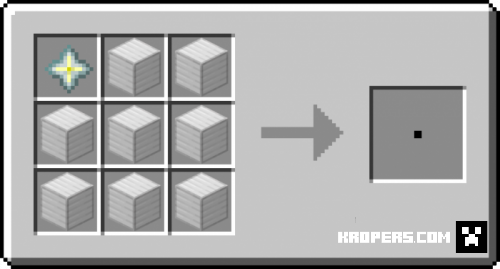 markus
19:25, 29 August 2021
122
0
Black Holes are the most extreme things in the universe, capable of ripping planets apart and trapping light with no way to escape. If you are anything like me, you are probably endlessly fascinated by the way Black Holes work, and now you can have them in Minecraft Bedrock Edition too! Let's get you started with the basics.

In this addon, there are 8 different sizes of Black Hole and one large White Hole. You can obtain all of these, but it all starts with the first recipe you need to know. Firstly, real life Black Holes can realistically be formed by anything compressing beyond its Schwarzschild Radius. For example, to make a Black Hole out of Earth, it would need to compress to about the size of a peanut. For a human, well, more than a trillion times smaller than an atom. However, as impossible as this seems, it happens a lot in the universe thanks to stars reaching the end of their lifespan. You see, for as long as a star is in space, it is undergoing a process known as nuclear fusion. Hydrogen [H] atoms smash together, merging their nuclei into that of an isotope of helium [He]. This process releases so much radiation that it pushes against its own gravity and remains stable. However, for stars many times more massive than our Sun, these newfound helium atoms keep fusing under the immense heat and pressure of the star, forming heavier and heavier elements until they reach Iron [Fe]. Iron cannot fuse which means suddenly there is a great imbalance between radiation and gravity and the star collapses at a quarter of the speed of light into a Black Hole.
I thought about how to replicate this process in Minecraft, then I realised I was overcomplicating it. Put 1 Nether Star and 8 Iron Blocks in your crafting grid. I know it's expensive but you are crafting a Black Hole, so it's ultimately a fairly balanced recipe.
Black Holes can be crafted with one Nether Star and eight Iron Blocks.
To destroy Black Holes, you can destroy them with your fist or, perhaps more safely, push them with a Piston. They can't be destroyed by explosions or boss mobs, but if you are feeling expensive, you can combust them in a furnace, as long as you are prepared to wait 25 minutes.

Place a Black Hole down. Fairly small and insignificant, right? It does work, but it has a tiny radius, so you need to grow it by giving it mass. "How do you do that?" - I hear you ask. Well, Particles and Antiparticles. "How do you get those?" - I hear you ask. TNT. Seriously. Get some TNT and blow it up. Somewhere near the crater you should find one green Particle, and one pink Antiparticle. Clicking on the Black Hole with the Particle will make it grow, and clicking on it with the Antiparticle will make it shrink. Be careful though, because shrinking it beyond its smallest size will make it disappear forever! This process mimics how Black Holes die in real life, through Hawking Radiation. Thanks to the Big Bang at the start of the universe, spacetime has been, for want of a better word, wobbling. These wobbles are called quantum fluctuations, and they constantly produce pairs of Particles and Antiparticles, with positive and negative energy respectively. The particle pair annihilate each other in an instant, unless they get separated, i.e. across a Black Hole. If the Antiparticle crosses the event horizon but the Particle doesn't, the Black Hole has no choice but to decrease in energy by an inconceivably small amount. This causes the Black Hole to shrink, since energy directly correlates to mass (E=mc^2).
Particles and Antiparticles drop from TNT explosions.

You may be wondering how to manipulate the size of Black Holes when they get so volatile at larger sizes. The answer, Exotic Matter (Disclaimer: Exotic Matter probably cannot survive Black Holes in real life. I just wanted something that was educational and seemed mystical enough!). In real life, Exotic Matter is a hypothetical substance or particle that would behave in a way that violates the laws of physics, such as having negative mass. It also describes states that are not encountered often, the most notable of which is the 5th state of matter, the Bose-Einstein Condensate, or BEC. This is usually created by supercooling a gas of bosons to near absolute zero (−273.15°C or −459.67°F). To craft Exotic Matter, surround a Bucket of Water with eight Blue Ice. This is the closest I could get to supercooling lol.
Exotic Matter can be crafted with one Bucket of Water and eight Blue Ice.
Black Holes do not affect players holding Exotic Matter.

A long unanswered question is "Where does matter that enters a Black Hole, go?" It's a good point, since one of the laws of thermodynamics is that matter cannot be created nor destroyed. Well, one theory is that there is effectively a one-way tunnel through spacetime, where Black Holes are the front gate and the exit is a so-called White Hole, which spits information out in a different universe. Yeah, it's all theoretical and is unlikely to be anything outside of science-fiction, but it was certainly fun to add into Minecraft. First things first, put a Black Hole in the crafting grid. It will output a White Hole, which you can then place down. It has the same shape as a Black Hole, but is... yeah, white. White Holes cannot do anything on their own; there must be a Black Hole in the world in order for them to work. Hold Exotic Matter in either your main hand or offhand slot (if you don't, you will die), and walk into a Black Hole where you will instantly be teleported to the White Hole. Note that this doesn't work in reverse and there can functionally only be one White Hole in the world. I intend to change the latter sometime in the future.
Black Holes link to the first White Hole placed in the world.

Download the .mcaddon file and double click it in your file explorer to launch Minecraft and import it.

Download the .mcaddon file and click "Import to Minecraft". If that doesn't work, copy the link into a Notepad app and import it to Minecraft from there.
MAKE SURE TO ENABLE EXPERIMENTAL FEATURES! When you are applying it on your world, make sure you apply both the resource pack and the behaviour pack. If either of those are missing, it won't work. If you want to look inside the pack yourself or .mc file extensions don't work for you, consider downloading the .zip file instead.