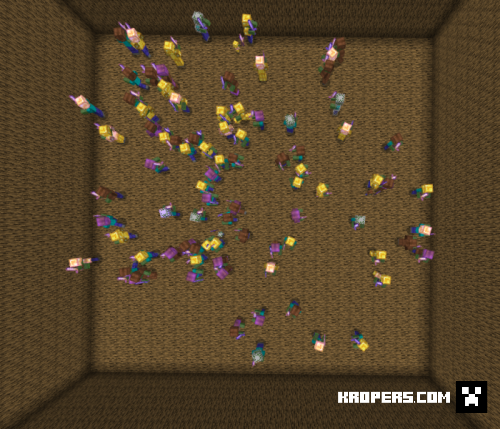 markus
17:18, 28 August 2021
66
0
We all know Minecraft gets easier with each update. With the addition of better weapons and armour, and the abundance of diamonds (especially with the new caves and cliffs update), it can be hard to find a challenge in Minecraft, this add-on brings back the challenge and difficulty Minecraft once had.

This add-on increases the difficulty of Minecraft by increasing many of the aggressive mobs health and attack values as well as increasing movement speed and detection range. Diamond ore also has a 75% chance of spawning so it is recommended you play on the caves and cliffs experimental mode where diamonds are a lot easier to come by. Some select mobs also have a higher chance of spawning with armour and weapons. Warning: This add-on is hard and is meant to be, you will need to prepare before going out at night or going to the nether and getting armour and weapons should be your first priority. Preparation is key and golden apples and totems of undying will be a significant amount of help. However if you believe anything has been made too hard leave a comment suggesting a change. This add-on is designed to be played on hard difficulty and some features may not work on normal and easy difficulties.

Zombies have double health, damage, increased vision range and much faster movement speed. Regular zombies move at a speed slightly slower than the player run speed and baby zombies move faster and are slightly smaller making them harder to hit, these baby zombies cannot be outran and you will need to kill them once they have spotted you. Zombies also have a significantly greater chance to spawn with armour, 95% of zombies will have at least full leather armour and every couple of hundred zombies will have diamond armour. These zombies deal massive damage and will be a major issue in the early game. Husks and drowneds are the same as zombies but will not spawn with increased armour rates.

Skeletons have double health, damage, increased vision range and attack speed as well as movement speed. They also have a guaranteed chance of spawning with an enchanted bow and increased chances of spawning with armour however not as increased as the zombie chances. Strays are the same however do not have the increased armour chances.

Creepers have a more powerful explosion so as a result they take longer to explode and have had no other attributes changed to avoid them being too OP.

Wither Skeletons are much more dangerous foes with much more health and damage, they will be able to see you from much further away and will move towards you much faster, be careful of these when entering an nether fortress.

Endermen are incredibly dangerous with more health and damage and much higher speed, when you have made eye contact with one get ready for a fight because they can now detect your from further away.

Raids will now be much harder with all mobs having double health and damage!

The Ender Dragon is now deserving of its boss status with double health, higher damage and much higher chance of attacking you with its breath attack and swoop attack. On top of this it also moves faster while flying.

This add-on doesn't make you act too differently from how you usually would when playing Minecraft however you will need to carefully plan your journeys and take special care during the first nights, mobs do massive damage and without the appropriate gear you may need to skip the night if possible or hide within a safe space. Golden apples will be your best friend when playing through since many things hit harder and faster. Due to the increased risk and challenge of many mobs it may now actually be viable to consider smite and bane of arthropods enchantments depending on what your next task will be.

NOTE: Delete old version of this mod from both the resource folder AND behaviour pack folder before installing the new version

Thanks for downloading the add-on!