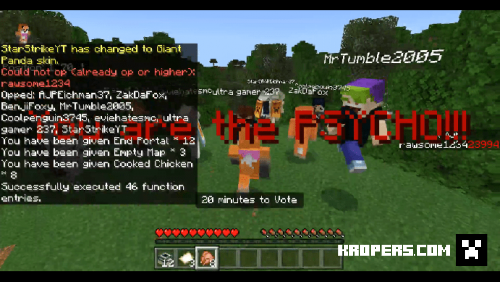 markus
22:19, 27 August 2021
85
0
Welcome to Psycho! This gamemode is a cross of Minecraft Murder Mystery and UHC. A Psycho is randomly chosen by the game and they must kill all the innocents before they reach the End Dimension.

In Psycho, the goal is to kill all the innocents before they reach the End. If the psycho dies before then, the innocents win. The innocents are not allowed to say who is killing them, but are allowed to give hints to it (coords, etc.) Groups of more than 2 are not allowed, The innocents may also not kill the Psycho unless they have seen the psycho attacking a person, or are being attacked themselves. When an innocent dies they are no longer allowed to speak. Because of this, every ingame minecraft day (20 minutes), the Innocents are allowed to vote someone out, like Town of Salem or the game Mafia. To combat this, the Psycho also can receive a kit that gets better the more innocents that are dead.


In order to start a game, when creating a world, you must:
Once in the world, type in chat "/function setupGame".
This will teleport you to 0, 0, as well as make anyone that joins the world spawn at 0, 0. It also sets up the voting platform and the psycho's kit. Once everyone that wants to play is in the game, then type "/function startGame". The game will let you leave the voting platform, and will give everyone their role. The psycho will also receive 3 maps, and everyone will receive 8 chicken, and 12 ender portals, as the end stronghold may be out of the border.

After 20 minutes, the game will teleport everyone to 0, 0 and thus back to the voting platform. The game will give a random player a writable book to keep track of the number of votes everyone receives. This is the only part of the game that is not completely regulated. Every person (including the psycho) gets 1 vote. Whoever receives the most votes is eliminated by the other players. If there is a 2 way tie between the people with the most votes, no one is eliminated and the game continues. The person that is voted out may not run, but they are allowed to fight back. After the vote, the game continues as normal.

Above the voting platform (0, 0), there is a small 5x5 area with a bedrock structure. This is the psycho's kit. The Psycho may go and receive their kit at any time, however the decision to get it lies within the concept that the kit gets better the longer the game has gone on. If the game has gone on for 2 minutes,, the kit will contain wooden tools, leather armor, etc. If it's gone on for an hour, the kit will contain diamond armor, iron or diamond tools, etc. To receive the kit the Psycho simply needs to enter the structure, and then they have their kit. Everyone is notified when the psycho receives the kit.

There is a 512x512 border around the map. It is made of barriers, and it is so that the psycho can find people easier.

The animals in this behavior pack will automatically drop the cooked version of their meat: Cows will drop steak, sheep will drop cooked mutton, etc.

It's not technically possible for ores like iron and gold to drop their ingots. The loophole is that there is a custom recipe for this. By putting raw iron into your crafting table (or inventory crafting table) you can receive iron ingots without having to smelt.

You can now craft blaze rods! In order to do this, all you need is a stick and a magma cream! But... Magma Cubes are annoying to kill, and don't always drop magma cream, right? So now you can craft magma blocks into magma cream! You get 4 magma creams from 1 magma block!

Since I couldn't figure out how to increase the drop rate of apples, I just made it so you can craft them! You know how to make an iron block? It's like that, except replace the ingots with leaves and the iron block with an apple!

Clerics will now trade ender pearls as a tier 1 trade for 1-4 emeralds each.
Endermen also have a higher drop rate for enderpearls.

There is currently some sort of bug being worked out to do with the nether, but in the meantime you can now craft slime balls into magma cream, and vice versa.

If someone dies unfairly (like at the start of the game or due to a bug) or someone joins late, typing /function reviveInnocent will revive the nearest dead player. This will ONLY WORK for innocents.

There are a couple of features in the pack that can be turned on. These must be turned on before the game begins.

The timer that runs for each day for voting can be turned off with /function timerOff. This means that either you can decide not to have voting at all or have all the players work their way back to 0, 0.

In case for some reason there is no village or nether portal, then after the first vote, a wave of slimes will be spawned at the voting platform when there are 10 minutes until vote! This must be toggled on with /function slimeSpawnOn.

If people tend to stay underground for the entire game, then you can have lava be placed at y=40 after the second vote. To do this, type /function lavaAt40 before the game starts.

Psycho 2 is a toggleable gamemode where the game will pick 2 random Psychos instead of 1! The rules of normal psycho still apply, but now there are 2 psychos. The psychos will be notified of who the other one is when the game starts. This mode can be turned on with /function Psycho2On.

The soul is more or less a normal innocent with 1 interesting trait: they have 2 lives. They come back instantly, but the game still ends if the soul is the last innocent killed. When the soul respawns, everyone is notified that they are alive again. The Soul looses all their stuff, but they now know who the Psycho is. The Soul may also not talk or type once they're on their second life. They can vote by punching, but they may not attack the psycho out of voting. To add this role exclusively, type "/function AddSoulRole" into chat before the game starts!

The Double Agent - Thanks to Octoyoshi

The Merchant - Thanks to Benji

The Merchant is just a normal innocent that is affiliated with the Black Market. The Merchant has 5 wandering traders with custom trades. They start with 10 emeralds, and can use them to trade. To add this role exclusively, type "/function AddMerchant" into chat before the game starts!

The Imposter - Thanks to CatB0xFox

The imposter is a normal innocent that is trying to do one thing: confuse everyone. At the beginning of the game they select one of the roles in the game and they have to pretend to be that role. They're still innocent, so they can't kill anyone, etc, but they can do their best to pretend to be the role they're impersonating. To add this role exclusively, type "/function AddImposter" into chat before the game starts!

The stalker is a normal innocent that is has to stalk people around the game. They are allowed to take liberties to gather materials, but they have to follow the assigned person as much as possible. Their target changes every 5 minutes. To add this role exclusively, type "/function AddStalker" into chat before the game starts!

PSYCHO 2 ONLY. The trickster is an innocent. When the Psychos are told who their buddy is, the trickster will be included. This means the psychos may do things in situations they may not otherwise as they may think the trickster is in fact their partner. To add this role, type "/function AddTrickster" into the chat before the game starts.

The Overseer is an innocent role that is able to cause events. 5 minutes into the game, the Overseer will receive a piece of paper. By throwing this on the ground, they'll receive a shulker box with a number of event inside. Three of these events can be used at any time. To activate an event, you throw the item on the ground. Events range from an inventory slot clear to giving everyone double health. To add this role, type "/function AddOverseer" into the chat before the game starts.