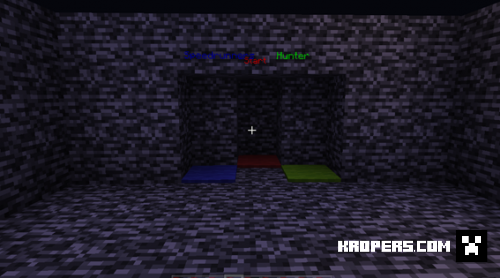 markus
22:06, 27 August 2021
83
0
Hello there, here cristopher with a new add-on to play with your FriendsThis add-on tries to play manhunt but now the hunters will be mobs, in a moment I will explain how this WorksMeanwhile many thanks to the people who are reading this

How to start the game?

In the lobby you have to enter the red carpet, but it will not start unless there is a player in each team, that is, at least one player in speedrunner and at least another in hunter.
If this is not the case and try to start the game you will get a red message like this
How does it work?
First, you start in the world in a lobby like this:
Then you choose a team, the Speedrunners or the hunters
If you choose the speedrunners you have to end the game to win, but if you are a hunter you will have some changes. First, when the game starts you will have to wait a minute to be able to descend into the world and chase the speedrunners after appearing in the world you will be invisible and you will not be able to do damage or break blocks.
To become a mob, you need to approach one of them and interact with them
Those currently available are:
Zombie:
Like a zombie you will burn in the sun, the mobs will not attack you
Drowned:
As a drowned you will burn in the sun but the advantage you have is that you will appear with a trident and you will be able to breathe underwater
Husk:
Like a husk you will not burn in the sun and when attacking any entity you will leave the effect of hunger
Zombie villager:
Being a zombie villager is the same as being a normal zombie
Creeper:
Like a creeper you can be in the sun without burning yourself and what everyone expects ... (drum roll) to be able to explode when sneaking
And If you are lucky enough to be struck by lightning from the sky
You will become a charged creeper
Skeleton:
When you transform into a skeleton you will have a bow, and arrows to attack
Spider:
As a spider you will have less life, and you will be an arthropod at the moment it is a bit bugged, I do not recommend its use
Enderman:
As an enderman you can teleport with your ender pearls, you will have 20 hearts and the water will hurt you
Changedor:
The "Changedor" is an item that will be in your inventory as you are a hunter all the time, to use it you have to have it in your hand and once you have it it will teleport you to a random speedrunner, and you will be invisible to transform into another mob
What do I do if the players are in another dimension?
Well, there is a room in the lobby with portals
And you can go to the nether-world or the end-world.
After being there, you can use the changedor to teleport to a speedrunner

WARNINGS
-If the game started, you should not enter the start folder because you will start the game
-Do not create a spawnpoint on a bed and if you do destroy it because you will not be able to appear in the lobby to use other portals
-If in the lobby for some strange way, it does not start the game you should put the following command / function zombie / Attempt_to_start before putting it make sure everyone has a team,