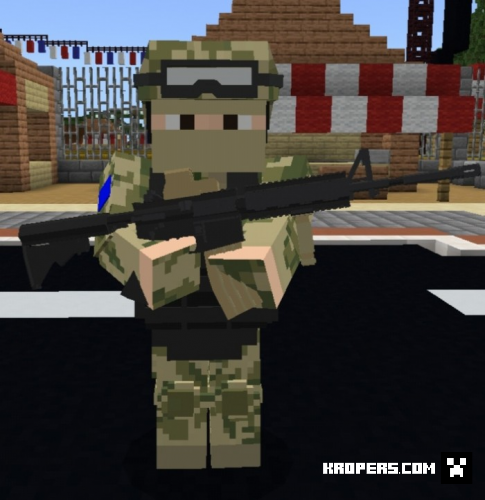 markus
19:49, 14 August 2021
142
0
This is a simple NPC soldier addon, it's for adding NPC for faction games etc. There 2 different NPC factions you can join. Unfortunately the sounds are currently missing, but I'll fix soon..

This addon is a simple NPC-Soldier addon what adds two different soldier npcs from two different teams.
This addon is mainly created for rewrite, and use it for other addons....
If you want to use the codes credit me (ID9999) and if you also want to use the animations, credit BendyTheDemon18 and for the model and texture credit Pinkdemon and the gun model is from mcextremecreator
The NPC:
NPC in a battle with the other NPC:

Now to the features:
At first there two different factions:
-team1
-team2
You can join one by typing /function team1/2
And if you want to leave a team type /function team_leave
Both soldiers have the ability to don't get friendly fire demmage, what means you can't hit them if you're in the same faction and they can't hit each other.
Also each soldier is tame able with diamonds.