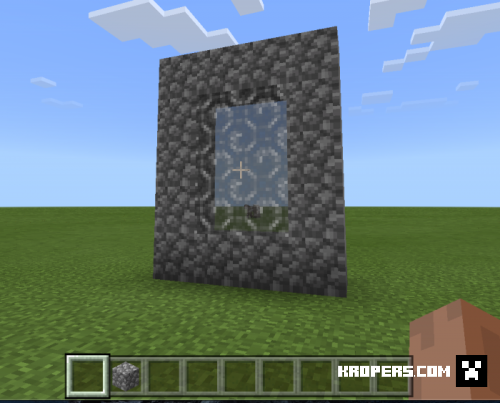 markus
21:10, 13 August 2021
136
0
This addon adds in 4 new dimensions to your game to spice things up a bit. It is simple and just adds 4 new interesting and challenging bosses for you to fight in these new dimensions.

The first dimension is the cave dimension, being challenging but rewarding.
First, the way you get here is with 10 cobblestone and dropping in a lava bucket in one of the corners.
Once that is done, it will look like this:
When you enter, you will be greeted by a lot of ores, but a ton of wither skeleton spawners. Spiders also spawn here naturally.
It simply rewards you with ores for coming here. However, you will find a dangerous boss known as the ancient cavern spider. It has 700 health and becomes stronger and more defensive at half health. It behaves like a normal but buffed-up spider but will strike you with lightning and a poison spell. It also has poisonous bites. It deals over 20 damage and can kill you easily if unprepared.


The next dimension is the sky or skylands dimension. It is simply a small area above the sky that can be reached with 10 blocks of quartz and throwing a torch in one of the corners.
Upon entering, you will find yourself somewhere where zombie piglins will naturally spawn, an oddly mysterious temple, and maybe even a few rich resources.
It's quite small but is planned to be expanded on with its own addon in the near future.


The next is quite an unforgiving dimension: the temple dimension. It is reached with 10 sandstone and regular flint dropped into one of the corners.
When entered, you may be greeted by a few naturally spawning husks, towers with strays that house no loot, and a large temple that houses the Firic Mummy guarded to the brim with skeletons.
Inside the pyramid is the firic mummy that waits for you. He is immovable, will keep blasting out shockwaves to send you flying a bit back, and will shoot intense rounds of fireballs at you. He has 600 health and will be granted a shield at half health.


Last up is the toughest dimension: the ruins. It is reached with 10 stone bricks and throwing lapis into one of the corners.
When entering, you will be greeted with an area of no ores and only what remains of a no-longer-existing world. This place only serves as evidence of what used to be a nice place to visit. Now it is barren and darker than it was. It simply has naturally spawning ruin golems that sometimes fight each other and may even accidentally knock you away.
The soul fire arena leads to the hardest boss: The Skeletal Dragon. It can't fly anymore, but has 800 health and only becomes stronger and more resistant at half health. He deals 25-30 damage per hit. He will also strike you with lightning and summon large exploding bones above you. He's dangerously quick, so come prepared.

New boss: Sky dragon. He is a stationary boss with 800 health and gaining of a defense boost at half health. He spews out lines of sky orbs. He summons shockwaves with devastating 40 damage and will spawn targeted chains of lightning on the player. He is found in the skylands.


Firic mummy now has a phase 2 that spews out poison and shockwaves. The temple will be destroyed and the "Temple's Death Worn". And before you ask, YES the death "worn" instead of death "worm" is intentional. Otherwise, he has 600 health and a defense boost at half.


New items:
First, the iginition items for portals has been changed to these craftable items.

BUT, there are also staffs you can get from the bosses as well. The death worm drops the temple staff that gives you regen and turns you invisible as a getaway device. The cavern spider will give you a staff that freezes nearby enemies and effects them with a poison spell. The skeletal dragon will drop the ruins staff which summons a bone projectile above enemies. The sky dragon will drop a sky staff that summons chain lightning on nearby enemies.

These items are NOT craftable. They may have infinite durability, but they have a large cooldown.

This is all the addon offers for now. I do hope to expand upon it with maybe enough support. These dimensions may be small, but they are still challenging, rewarding, and explorable. It adds a bit of extra tension to your game.