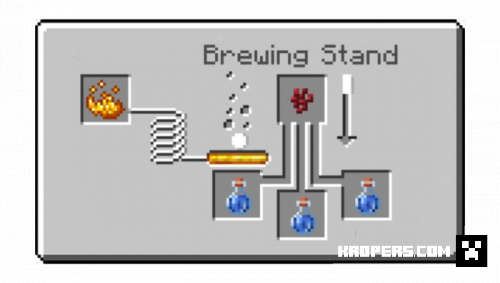 markus
12:09, 11 August 2021
70
0
Have you ever wonder to have more potions? Such as potion of levitation, potion of haste and more, then this addon is for you. Having these kind of potions allows you to obtain other effects via brewing just like other vanilla potions

To brew them as usual we need water bottle and will combine it to nether wart to form an awkward potion. As usual awkward potion is the base potion we need in brewing different effect potions.
There are 8 different potions added in this addon:
Here are the reagents items for brewing the following potions shown above. Make sure you brew an awkward potion first before brewing these potions.
Just like vanilla potions, these potions can enhance the effect level with glowstone dust or can increase the duration with redstone dust. Blindness effect is an exception, this kind of effect doesn't have higher level therefore you can only increase its duration.