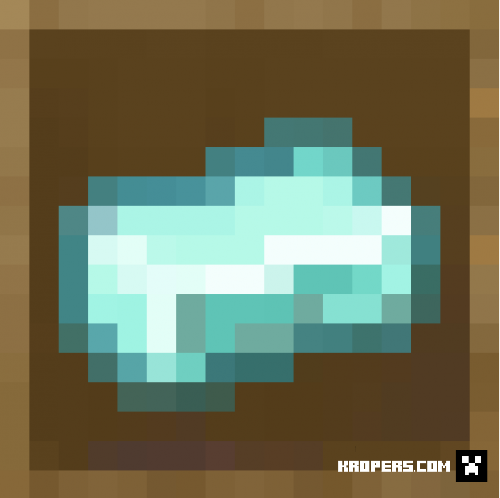 markus
13:03, 10 August 2021
111
0
This add-on adds some mechanics and some elements that in the long run could benefit the gameplay a bit in general, but on the other hand they can make it a bit inefficient (which by the way is planned). Some things like Half a Golden Apple could be an advantage for the player since by not having to use 8 ingots to create it, you save inventory and get almost the same. But at the same time, other things like the Diamond Ingot could be a bit tedious to craft as it could consume time and materials, but in the end that depends on each player and their perspective.

This add-on adds some mechanics and some elements that in the long run could benefit the gameplay a bit in general, but on the other hand they can make it a bit inefficient (which by the way is planned).
All the items that you will see within this plugin can be obtained without the need to use commands, this means that they can normally be created as an item that is already in the game in a Crafting Table. In turn, you can also find them in the creative inventory (mostly in nature and various.

-ATTENTION-
Some functions that this plugin adds may not be efficient in the game, that is why I advise not to put it in a survival world. since the experience cannot be the same and it could ruin the way you play. For the moment use it in creative mode. I am working so that this is no longer the same, and to be able to play with this complement in a survival world.
From new items, textures, recipes and some new mechanics! In this section I will explain all the items and mechanics that are added in this plugin:


Making diamond item  was never the easiest task in the world, but now it is even more inefficient ... Now if you have this ADDON installed:  there will be a new item  called:  Diamond Ingot. So, all the items and blocks that ever had a diamond in their creation; That diamond will be replaced by a Diamond ingot:
This includes:


Now, as you can see, it is impossible to create a chestplate with PURE diamond.


In this case; Instead of PURE diamond you will need Diamond Ingots to craft the chestplate as mentioned above...

Now, If you want to make a diamond ingot, its very simple: First, you will need a furnace or a Blast furnace. Then, Once you have them, you must put the PURE diamond inside and wait for the result to come out: One Diamond Ingot per Diamond,
(BUCKET  ITS  NOT  NECESSESARY,  ITS  JUST  THE  FURNACE'S  FUEL)


The baguette in addition to having a very peculiar texture similar to that of bread; This nourishes 3 times more than ordinary bread! What does this mean? If the bread nourished 6 levels of food, the baguette will nourish 18!

The crafting of the Baguette is very simple ... you only need to craft 3 loaves, and once you have them you will have to place them diagonally on the crafting table.
As follows:


Sometimes it happens that at home we are lacking minerals, especially diamonds and gold. We will focus on one of them; Gold.
In 1.16 gold began to be a useful mineral. Trade together with piglins, make netherite, etc. But did you forget something? The Golden Apple.
This is very useful when talking about combat; it gives us more strength, endurance and regeneration. but it usually happens that we don't have enough gold to do it ... But now, luckily we can make half of the golden apple.  This new item can come in handy at a certain point, as it can give you Tier V regeneration for 10 seconds, a somewhat useful mechanic. 10 seconds that can save you from a dangerous situation.
The crafting is just as simple as the previous ones: you will only need 5 gold bars and an apple, arrange them in the following way:


This "new mob" looks like a ghast .. except for its texture and behavior.
It is literally a modified Ghast ... Now  Ghasts  will have a dropper texture that changes to a dispenser one when it fires. Also another difference are  its projectiles ... now it literally launches explosive EGGS. Yes, a re-textured fireball. Outside of that;  nothing changes in the ghast, it is exactly the same!


Now the shield is a little different when it comes to texture. Since with this addon the shield is a reverse UNO card! Exactly, only that changed. Nothing was modified outside of that.


There are days when the heat is unbearable, maybe it's summer? or a simple heat wave. Whatever it is, it's better to be cool (:
Yes, there are now shorts in Minecraft! Yes, Shorts in Minecraft... Before you say that they are completely useless, I come to tell you that they actually are. The truth is that I only implemented them because it seemed like a good idea and a bit Cursed.
These are all the Shorts I've implemented so far:

But more Cursed it is its elaboration, since it is not how you think it will be ...
Technically you will have to cut the leggings in half with the shears in order to make Shorts.

This is how it sees in-Gameplay:


Also on a player:


Now Bedrock is literally BED ROCK. Its texture is somewhat different if we refer to the bed that is on its surface. Yes, nothing more: Bed Rock.


That's right ... chicken nugget. Now with a cooked chicken you can simply insert it on a crafting table and 4 chicken nuggets will come out as a result. The truth is that its nutrition is somewhat dire, since it can only give you 1/2 levels of food.


Are you a fan of KFC? do you like their delicious fried chicken? it's your lucky day! Now with 6 chicken nuggets and a bucket, you can create a KFC bucket! Unlike chicken nuggets, this one will nourish you with 9 levels of food!
Crafting:


This new food is the mixture of a cooked pork chop and cooked beef, which unlike these, has a somewhat peculiar texture, in turn nourishes 6 levels of food.
Its crafting is as follows (shapeless):


Continuing, this food nourishes 8 levels of food, it is the mixture of steakchop and a cooked cod.
Its crafting is as follows (shapeless):


For the third place we have the steakcochickchop, which nourishes the same as the previous one. (mixture of steakcochop and cooked chicken).
Its crafting is as follows (shapeless):


For the fouth place we have the steakcochicarrochop, which nourishes the same as the previous one. (mixture of steakcochickchop and carrot).
Its crafting is as follows (shapeless):


CursedCraft from what I've heard has a very Vanilla interface and environment ... For those who don't know what this means: when a Mod / Addon is very Vanilla it means that its functions, mechanics, elements, textures are very similar to that. from the original game (has the Minecraft style). It is for that reason that I decided to take it very seriously and create my own title (logo) for CursedCraft:


By the way, as you can see: in this image you can see a very curious Splash text "Buff Axolotl".  That's right ... I also created my own splash texts:

IF YOU HAVE ANY SUGGESTION FOR A CUSTOM SPLASH TEXT, PLEASE LET ME KNOW IT VIA COMMENT OR DISCORD!


-HOW  TO MAKE IT WORK?-
If you want to have this title on your main Minecraft screen: you will only have to insert the ADDON within the Global Resources:


If you only want it active within your world (title), simply by putting the ADDON in the resource / behavior packages it will be active:


Let's be honest, who uses the coal block in Survival?
I know this is a very very useless change; but that seemed funny to me. Now it is practically impossible to get a coal block, since if you try to craft it, something like this will happen:

At the same time, as mentioned above, I do not know precisely if it would be possible to do a Survival World  with this Addon installed, since some functions that this plugin adds may not be efficient in the game,and the experience cannot be the same and maybe ruin the way you play. As I said:  for the moment use it in creative mode. I am working so that this is no longer the same, and to be able to play with this complement in a survival world.

RECOMMENDATIONS
for the addon to work it is very important that you activate the experiment options (Experimental Gameplay)
otherwise it won't work.
*I can´t insert images here, but at the world settings look for:  Gameplay>Experiments> Activate all of them (except "custom biome").