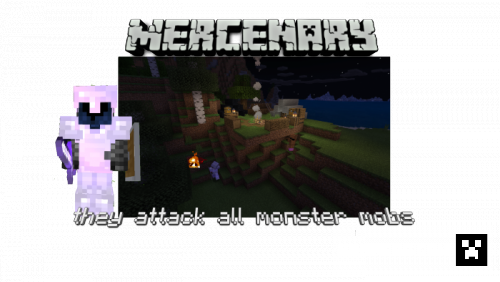 markus
11:46, 10 August 2021
149
0
More difficult nights, difficult bosses, structures with very good loot, super-powerful items and mobs that will help you in your adventure all that in the complement that you will see now.

A group of people who live in camps that are frequently generated and who have different weapons and who trade things from you and if you try to steal them they attack you without mercy, they can also be hired if you trade frequently with them.

A doctor who lives locked up in a dirty house and who likes to read constantly, will sell you several things including the stinky mask that gives night vision and the syringe with suspicious blood which he left to you to guess who you have to give it. Its structure appears frequently in forests

A panda that protects a structure, which are two that are generated in the jungle and one of them appears very rare and contains very good loot, the panda has several attacks which the damage varies.

The plague is a very strong boss, its damage is enormous, when it appears it has two companions that are two plague wolves that will help it in its hunt, the plague attacks all living beings in the world, sacks towns with great ease, destroys everything that you have at your fingertips. Step, if it is day it does it at night, it regenerates when it kills a mob, it is only a mob that brings tragedies to your world so I recommend you kill it as soon as you invoke it. When you kill him, he gives you the sword of the plague and the head of the plague and rotten flesh and bones.

The unbound elemental is a very powerful mob, its projectiles leave craters that look as if an asteroid fell there, it summons unboneds that help it in its slaughter, it appears asleep in a structure that appears in the forest and if you hit it it will wake up and It will begin its attack and absorb the fire and lava. When it dies, it drops unbound crystal, unbound orb, netherite and bones.

The nagars appears with 5 aggressive bees next to a tree that is generated by the forests, it has enemies to the unbound, plague and the player, it has several attacks which one of them invokes flowers that in a while become minions of nagars That will help him, also when he has little life he will take out some shoots from the ground that will give regeneration 2 to the nagars so you have to kill him quickly. When he dies he drops nagar wood and nagar heart that serve for an important crafting.

It is achieved by buying it from stinky medical, when you put it on it gives you night vision.

It only serves as decoration and is obtained from the Plague.

Deals 10 damage, can be enchanted, and is obtained from the Plague.

It is a very powerful staff, it shoots Unbound projectiles and if you crouch and press, unboneds will come out that will attack all mobs except the player and follow you if you have the staff in hand. It is crafted as follows:
Materials: unbound orb, unbound crystal and nagars wood.

It is achieved by killing the mercenary, if you eat it raw it will give you many negative effects, it can be cooked in an oven, smoker and campfire that cooked will give you nausea and more nutrition.

The jade ingot is manufactured as follows:

Materials: Jade Shard (available in Jade Panda and Panda structures) and Gold.
With the jade ingot the jade armor is made and its crafts are the following:
The appearance of the armor is as follows:
and it can be enchanted also the armor is good and you are immune to recoil but it gives you slow 2 because of how heavy it is.

The mercenary nagars is an item mob that is made in the following way and where the nagar's heart is dealt with:
This machine is very useful, its storage space is incredible and its jump more, this mob serves for trips in your world so I would recommend it.