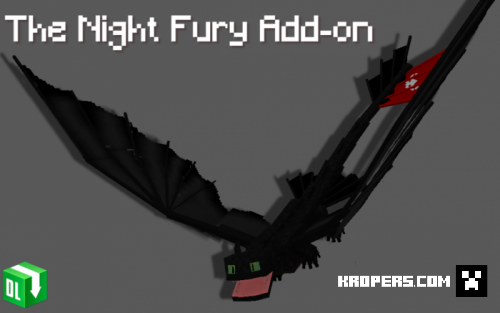 markus
11:06, 08 August 2021
352
0
Welcome the Night Fury from HTTYD (How to Train Your Dragon) to your Minecraft worlds!!! There are male and female variants of them. You can also tame your own Toothless! They soar through the Mountains.

The Night Furies have unique features including things from the movie. For example, it can open its dorsal spines when it flies. They have growl, fly, glide, move, sit, sleep idle, and roar animations. The Night Furies also have sounds straight from the movies! They sleep during the day, and attack during the night.
The Night Furies spawn in the Mountains. Although, they are quite rare. They attack sheep, villagers, iron golems, and snow golems. They are fast, they shoot fire balls, and fly a lot. To tame them, you have to calm them down by feeding them raw mutton. You only have to give them mutton once. You then feed them salmon. After feeding them salmon, hearts will appear. This means it is tamed. You can crouch and long-press/right click to make it sit. You can equip them with a saddle to fly them. While riding the Night Fury, you can long-press/right-click with a stick, and that will make it shoot its plasma breath.  Very rarely, after you feed a wild male night fury raw mutton, he will have a red tail fin.

There are male and female variants of the Night Fury. Males have green eyes, and females have blue eyes. You can breed them with salmon. There is also a rare Toothless variant that the male Night Fury will sometimes become after you feed it raw mutton.
Toothless:
Males: