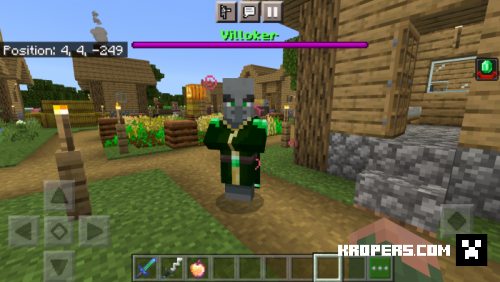 markus
21:40, 05 August 2021
337
0
This addon was inspired by Alien Being's series, Villager vs Pillager Life. In my addon, I added most of the characters in the series including the main character, the Villager with the powers of the evoker (And his name in my addon is Villoker). The aim of the addon is to help players protect their villages from very strong mobs from this addon, from other addons and even from the game itself


Information about him:
A villager with evoker powers that can control over life and death. In the series, he have displayed during his childhood, and he defeated the raid of the illagers' leader on his village. And brings peace to the world. And later he even brought together the villagers and the illagers.

Pillagers that joined the villagers side, helping villoker save other villages from the illagers.

Vindicators that joined the villagers side, helping villoker save other villages from the illagers. They use axes to attack

The son of the evil doctor(scientist) and Villoker's best friend. In the series, he created the vaccine for covid 19(coronavirus) and saved the village from death

The villagers before they have been changed in the 1.14 update (The new villagers are there too, I didn't replace their texture)

The evil genius who designed all the inventions for the illagers. In addition, he also has good relationships with the witches.


6. The Pillager Captain:
The leader of the illagers, a tactical genius who designed all the raids of the illagers on the villages. (If you throw a illager banner next to him, he'll take it and put it on his back/head)

7. Derp Pillagers:
Derp pillagers are actually normal pillagers, but they have a derp skin

8. Derp Vindicators:
Derp pillagers are actually normal pillagers, but they have a derp skin

10. Nitwitch
Nitwitch is the main character in Villager & Witch Life and Villager vs Zombie Life. You can find him in the friendly patrols.


Creates the defensive attack of the evoker (fangs shield). Be careful when using it because you can accidentally hurt yourself while using the totem.

Enchanter's Tome:
The Enchanter's Tome is an artifact added in the Minecraft Dungeons DLC Howling Peaks, where it is used to give allies various buffs.

Soul Knife:
The Soul Knife is a melee weapon in Minecraft Dungeons. Its unique variants are the Eternal Knife and the Truthseeker


Villoker features that have:
Creating Totems:

You can use golden apple to heal them (Villoker & other friendly illagers), In addition to this, Villoker can also eat bread(Only Villoker can eat bread)