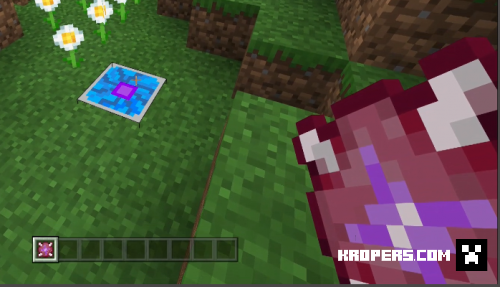 markus
17:47, 03 August 2021
63
0
This addon adds in the corruption to your Minecraft world. The corruption is a force of nature that only you can create. Once it is created and activated it will spread to blocks in your game consuming them without you being able to stop it by breaking it. However there is a way to stop it from spreading. This is quite a big one so sit back and please read the full description.

Please check out this video for more information on this addon and the ad free download.

This is the corrupted core the source of all corruption in your world. These do not spawn naturally and must be crafted to start the spread of corruption.

After the corruption has spread the core will become obsidian.

The corrupted core can be crafted using 8 blocks of crying obsidian and a beacon.

A block that forms after the corrupted core has been used up. Currently no use but planned uses in the future for bosses.

Get ready for the grossest fishing trip as corrupted gu is your one way ticket to the corruptions most powerful features and is created by corrupting water. A fishing rod is needed to fish out of this stuff.

A indestructible corrupted variant of stone. A cave full of this stuff would be quite interesting.

A useless version of a wooden log that wishes it had its own plank variant.

The bacteria in the corruption are hungry for our world

The most basic vile crafted with one corrupted bacteria and a flint and bottle. This item eats gravel and can be undone by right clicking it.

Crafted with a gravel vile and cobble stone to fit the bacteria's new taste as well as another bottle to create your new solution. This item eats cobblestone, but hasn't lost its taste for gravel and can be undone by right clicking it.

My second favorite vile the lava vile created by adapting the lava eating bacteria with some new sweet honey as well as a sponge to consume the lava better as a liquid. This item eats lava and can be undone by right clicking it.

The purification is a substance once underground but long gone from time, but can be re created by reversing the corruptions effects against itself using three ores of various colors as well as lava and a bottle. This vile will eat through every corrupted block except corrupted obsidian which can be broken by hand.

This black vile is created using obsidian eating bacteria as well as some pink and orange mixes with a tiny spice of corruption. This item eats lava as well as obsidian and can be undone by right clicking it.

The sand eating bacteria is true to its name and will eat sand once given the smallest taste.

Going back to the nether adapting the sand bacteria's taste to soul sand using lava bacteria to help out is a good way to make the soul sand vile that will eat soul sand.

The stone vile the most powerful of its kind can only be created by using the cobblestone vile and the stone bacteria itself. once a tad bit of stone brick is added in it will create this powerful mining tool that can be used to uncover ores and more.

This powerful vile created by the black seed of the dragon and the combination of all the other vile's that helped you get this far will create death. This vile will create a black hole that will stop at nothing to consume your world unless of course you right click it.

All corrupted mobs spawn anywhere there is corruption

This fearsome rooster is turned purple as it is manifested from the corruption. It will attack you with twice the speed as a normal chicken as well as dealing 1 damage. Has an 85% chance to drop corrupted gu loot if you are not a fan of fishing as well as a 10% chance of dropping tier 2 corrupted loot at well as a 5% chance to drop tier 3

The undead have never looked worse in death. The corrupted zombie had twice the speed as a normal zombie and twice the damage dealing 6 damage instead of 3. Drops tier 2 corruption loot which has sand eating bacteria in it.

The corrupted hissing menace is the perfect version of itself as it can run at you twice as fast with a twice as large explosion that will give anyone a head ache these guys are not to be messed with and will drop tier 2 corruption loot which has sand eating bacteria in it.

The beast of a smelly roar has manifested in corrupted form and will charge at you twice as fast and can knock you back twice as far with that roar as well as double the attack damage. This large beast will drop tier 3 loot which consist of stone eating bacteria to make your mining trip easier.

To download the mod ad free visit my video link in the description.