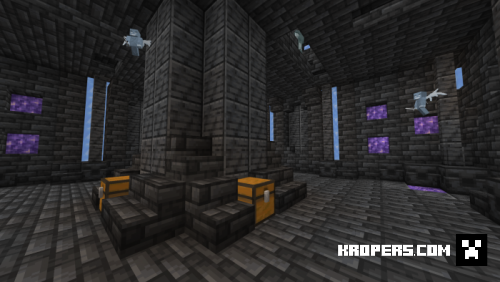 markus
20:39, 04 August 2021
53
0
Survival Reignited changes core mechanics of Minecraft and presents more goals and challenges in a natural feeling and vanilla style way, as well as significantly increasing the difficulty and slowing down the pace of the game in a fun and strategic way.

Remember when the first night was scary? Remember when the sound of zombies made you panic, and you didn’t have a full set of iron gear by the second day? Remember when you built traps and took precautions in order to survive? This addon reignites the feeling we all first got on our first night, or when we first crafted a diamond sword. Prepare to once again need to build traps and walls to defend yourself, to go on journeys to find resources, to bravely adventure through the now evermore hellish and unforgiving Nether, and relive your first days in Minecraft.
Here's a handful of examples of everything you can find in this addon!
There's anew, frozen crypt structure that spawns in the ice plains biome! They are hard to spot, and spawn rarely, but once you do come across one, it's filled with strays, vex, and various hidden traps. But at the bottom is several chests and budding amethyst blocks! You can even find shulker shells in the chests!

Another new structure spawns in all biomes. It's known as an Evil Outpost. Vindicators and Wither Skeletons that have come into the overworld through what are now ruined portals live inside! You can find several chests as well as blocks of gold if you're able to make your way up to the top.

There's a new End Portal structure as well! It's a single room with one hallway that spawns very rarely underground.
New, taller and more fortified Pillager outposts can spawn throughout your world. They have 3 chests inside.
Ruined and abandoned variants of village buildings such as blacksmiths, churches, and houses will spawn randomly throughout various grassy and forested biomes. All of them have 1 chest inside.

Ravagers can break more blocks now! the ones on the left are examples of what they can break through, vs. some of the ones they can't on the right.

Creepers explode with a much stronger force, and start fire everywhere around the explosion.
Wandering Traders have had some of their trades changed to make them more useful!

There is an extra step of installation even after you start the world! Use the command "/function survivalplus" in order for the full addon to work properly. You'll lose everything in your inventory when you do this, so do it right when you join the world. It also only needs to be done once, ever in a world.
Make sure cheats and all experiments are toggled ON in settings!

HOW TO UPDATE ADDON VERSIONS

After downloading the new version and having it import to Minecraft, on any world you've been using the addon on, go to behavior packs and remove the old version, then add the new 1.4 version.
Once you load into the world, type "/function UpdateSurvivalReignited" to finish the update. Without this, many of the new features won't get added!