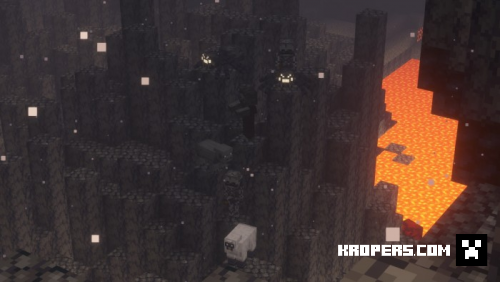 markus
13:19, 02 August 2021
93
0
Have you ever seen a mob and thought to yourself "this zombie looks out of place here in this snowy biome it would look so much better if it looked cold and covered in snow" or something along those lines? Well now with this resource pack they will fit right in, giving mobs (currently creepers, zombies, pigs, cows, skeletons spiders, chickens, endermen and sheep more will be added over time) custom textures to match the biome they are in now with 2 modes for bedrock, non persistent where the mobs will change as they move biome, and persistent textures where the textures will never change (this mode makes use of an addon), with 24 different biome textures per mob covering all major biome types including the nether and end, and It now supports bedrock and java, so if you play either version you can now use this on java too and the java version even supports biomes from the biomes o' plenty and oh the biomes you'll go mods so you can use it on your modded worlds too!

this adds custom textures for mobs to fit the biome the mob is in, at the moment 9 different mobs have been added however in the future I hope to cover every mob in the game. the 24 biomes that have custom textures are: basalt deltas, deserts, cold biomes, jungle, beach, birch forest, deep ocean, cold taiga, taiga, crimson, extreme hills, flower forests, normal forests, mega taiga, mesa, mushroom, nether waste, ocean, dark oak, savanna, soulsand valley, swamp, the end, and warped, the mobs will use there normal skins (or skins from any other pack you have active as long as that pack does not clash with mine) inside of plains biomes, or the biome they are native to. and the java version now is compatible with biomes o' plenty and all the biomes you'll go biomes no new textures were added for these biomes, but the most appropriate vanilla biome texture is used, this will most likely allow you to use it in your modded worlds as these are 2 of the most common biome adding mods in most modpacks.

Before you can use the pack you need to go into the setting for the world you would like to use the pack on and make sure this top toggle is turned on, the other 3 do not need to be. You may need to ask your realm or server owner or whoever hosts the world you play on to do this for you, eventually the currently experimental query's I use will be part of the main game without needing to do this, but for now  this is required for the pack to work, also doing this will not remove achievements if you just want to use non persistent textures, as It only a texture pack, achievements will only be removed if you use the persistent textures addon
to use non persistent textures (the resource pack only version) simply set the slider to non persistent textures like this and if you have the experimental toggle on it will work,
and to use persistent textures (the version with a behavior pack), slide the slider like this and activate the behavior pack on the world or ask the server (or realm) owner to activate it on the server (or realm) you would like to play on

to use on java simply click on the download for java link at the bottom, click files and select the version you would like to use, and place in your resourcepacks folder for that, make sure you have  optifine installed, and also please note that optifine is still not 100% finished for 1.17 so there are still some issues where some naturally spawned mobs dont always have the right texture, this should be fixed when optifine releases fully for 1.17 but other versions should not be effected

flower forest (in the lavender forest from biomes o' plenty)

extreme hills (in the alps from biomes o' plenty)

mega taiga (in the redwood forest from biomes o' plenty)

to install, click the download link at the bottom
then click the click here to continue link
now confirm that you are not a robot
then wait 5 seconds and click access free with ads here (you may need to scroll up to find it on mobile)
now click discover interesting articles
then after 10 seconds click the x at the top corner then press continue
and now press download, if you want it on bedrock, just open the file, or import it in whatever way you normally would depending on your device,
and on java see the instructions in the using on java section above