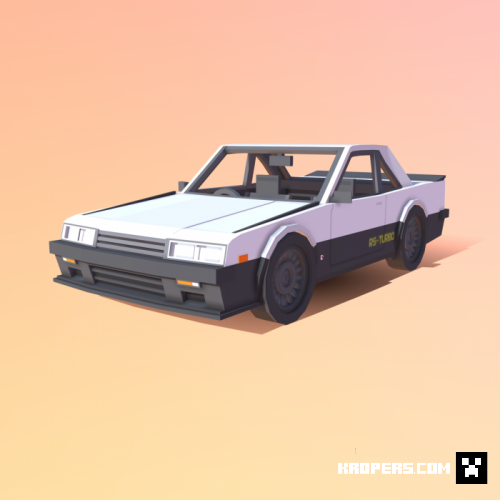 markus
14:14, 28 July 2021
87
0
Skyline R30, probs the second most underrated car to come out from the Skyline legacy - overshadowed by it's more famous successors, the R32 and the R34, which is quite a shame. For a coupe that was based off a sedan (which's purpose was to be an economical everyday commuter car), this thing was fast, capable of reaching a top speed of 180km/h. And just look at it. It's absolutely magnificent. Nothing looks more "early-80's Japanese car design" than this.But wait, there's more. If you thought this car couldn't get any cooler than that, you're wrong. It's involvement in motorsports, primarily the 1982 and 1983 seasons of the Japanese Super Silhouette Series was extremely successful. 2 wins in 82' and 5 in 83' - which shouldn't be a surprise as this machine is capable of making and upwards of 562hp.So what're you waiting for? Grab the keys and show off this one of a kind to all those R34 fanboys and assert dominance.

"Although making about the same power as the L20ET-powered GT-ES models, the version of the Skyline initially known as the 2000RS was released on October 2, 1981 as more of a stripped-down lightweight racer, without as many luxury extras included (quoted curb weight was only 1,130 kg (2,491 lb)). These were equipped with the naturally aspirated 4-valve-per-cylinder DOHC FJ20E engine generating 110 kW (150 PS; 148 hp) of [...]"

Has 2 variants and a total of 4 colors.
White - Stock

I've made a video showing how it's done so if you don't understand words, you can check that video out. The car in the video used is my previous Datsun 240z addon which shouldn't be a problem as the concept (animations, door and hood mechanics and sound effects) are the same for this addon (Skyline DR30).

You can still use the pack like normal if you decide to not turn on the Experimental option (Holiday Creator Features), but the 3 sound effects mentioned above (door open/close and hood sounds) wont play.

Method 1: Get their spawn eggs from the Creative Inventory. They are classified as spawn eggs. You can search "R30" without the " for an easier way to get them.
Method 2: Use /summon commands:
/summon r30:white1
/summon r30:red1
/summon r30:gray1
/summon r30:supersilhouette1