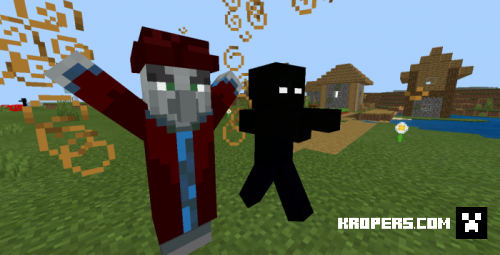 markus
13:49, 28 July 2021
109
0
This addon adds a few magical food items to the game which can be obtained by trading, defeating, brewing or crafting. This also adds 2 New Magicians in the game who will naturally spawn in the world. One of the two magicians is good magician - you can only trade with this one and will attack evil magicians; and the second magician is the evil magician - which is a new boss in the game and will attack villagers, iron golems, players, spirits etc.

This is an evil magician, by the name you can predict his nature towards a player. These will spawn naturally in a world during night time, might also spawn during raids in a village and will attack any player or iron golems that it sees. It will convert villagers permanently to Evil spirits which it uses as it's army, so make sure to keep all your villagers in a safe place, even if when a villager encounters one of these they will try to run away for their own safety. This is a new boss to the game which might drop awesome loot on death but it is hard to kill one as they constantly spawn Evil Spirits to attack you. They will also convert good spirits who are spawned by good magician into evil spirits.

These magical traders will also spawn naturally in the world, they can be of mainly three levels, Epic Common and Legendary. These levels decide what kind of trades do they sell to you, better the level is, more good the items and cheaper the price is (Common < Epic < Legendary). They will spawn Good Spirits to save villagers, iron golems, players, and self protection. They will convert evil spirits into good spirits if they ever encounter one. They are not a threat to anyone, just a wandering magical trader/ magician in forests, plains, mountains, etc.

Also known as prey ,will be spawned by evil magicians to protect themselves from a good spirit, good magician, iron golems etc. These spirits will despawn after 1-2 mins once summoned by an evil magician, if they were converted to a prey, that is from villagers or from good spirits, they will not auto despawn and will roam freely in the world. (Might despawn if out of render distance)

Also known as Saver, will spawn in the world by good magicians to protect themselves from an evil magician or a pillager. Similar to a prey, they also despawn after 1-2 mins once summoned by an good magician, if they were converted to a saver from preys, they will not auto despawn and will roam freely in the world. (Might despawn if not named and is out of render distance)

This bread can be obtained throught trading with a magical trader / good magician. This bread gives you a long and strong ability to go completely invisible (You still will have to take your armor off and keep your hand empty ) This is a common type and can be traded wilth all types of good magicians.

This potion has a 50/50 Chance of giving you good or a bad potion effect. it all depends to your luck whether you get a good potion, bad potion or maybe both at a time. Consider this as a lucky potion.

A bottle full of a strong liquid which will give you a temporary effect of Invincible which mean you cannot be killed, this have a chance of 0.08% giving you super strength and you will not feel hungry for around like 2 minutes.

You can even craft this potion:

I won't be telling anything about this food item over here. Why don't you try it yourself when you download the addon :>

These berries are specially for the people who love to explore, these will give you extra jump boost to climb mountains better, speed for fast traveling, full hunger bar (Not hungry at all), Night Vision for sighting etc.

You can even craft these berries:

You can even craft this apple: This is super expensive

When holding this totem, you become very tiny, tiny even then a chicken + you will become invisible for monsters and mobs which will be really helpful, how does it make you invisible? - It does as the mobs are unable to see such a tiny thing; This will reduce your health. Hold nothing to go back to normal size.

When holding this totem, you become huge, equal to a nether portal, this will give you extra health and attack damage to kill mobs which will be really helpful. Hold nothing to go back to normal size.

See everything by yourself in action + animations!