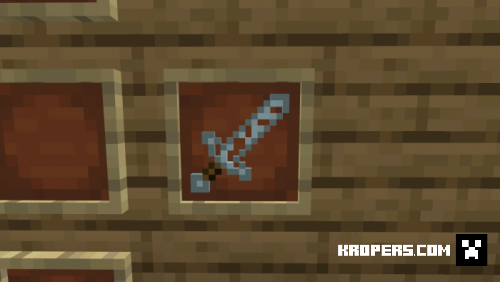 markus
12:52, 27 July 2021
61
0
Do you want new weapons? If not your weird and can find a different addon, but if you do this is the addon for you. This addon currently adds 12 new items, each of which have their own unique crafting recipe.

Of the 12 weapons 11 currently function strictly as swords/weapons and 1 functions as a sword/weapon and pickaxe.
Glass sword
3 attack damage and can be used to craft many other swords
Redstone Dagger
4 attack damage and is crafted the same as a Redstone torch
(Does not replace vanilla recipe)
Water Sword
4 attack damage, crafted from a Glass Sword and water bucket
Lava Sword
7 attack damage, crafted using a Glass Sword and Lava Bucket
Wava Sword
6 attack damage, made through a failed version of the obsidian sword recipe (found later in this description) (reference to making cobblestone instead of obsidian)
Poor Miners Sword
7 attack damage, idk why I just thought this concept was funny
Amethyst Reinforced Diamond Sword
8 attack damage, I couldn't think of a way to use amethyst without it being broken or too weak so I did this
Blue Blade of Epicnessss
10 attack damage
Obsidian Sword
10 attack damage, made from a Water and Lava Sword
Mjolnir
Based on the hammer of the Norse God of Thunder Thor
35 attack damage, functions as a weapon and pickaxe
I intend to add a throwing feature and lightning feature in the future
Goliath Trident
1 of 2 items currently in the goliath set
15 attack damage
I intend to add a throwing feature in the future (it's harder than you would think)
Green Goliath
2 of 2 items currently in the goliath set
15 attack damage

Click link. After item downloads click said item. Item will automatically import to Minecraft. Do process with both Behavior and resource files.