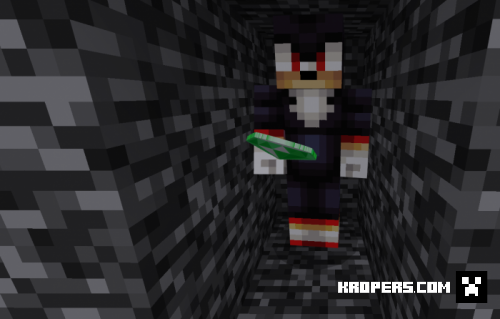 markus
16:18, 21 July 2021
94
0
This very addon adds the one, the only... SHADOW THE HEDGEHOG to Minecraft! Watch as he will get revenge on ANYTHING and even beat the ENDER DRAGON or WITHER, INSTANTLY!!! His first appearance was Sonic Adventure 2 and has become the second most popular sonic character. (he is my favorite sonic character)

This addon adds 4 things; Shadow, Chaos Emerald, Image Of Shadow, and Chaos Spear.
Shadow is the key part of this addon so, why not mention him first. He is a very powerful mob that can throw chaos spears, fist attack, teleport, run fast, and be tamed.
SHADOW THE HEDGEHOG
This is what Shadow looks like.(had to put him in bedrock cause he kept running to fast)
Health: 1024
Speed: 0 BPS - Infinite BPS(blocks per second)
Attack Stats: Has 1024 damage,  gives fatal poison whenever anything is hit by him, uses chaos spear(explosion power:10 not to be too op or laggy)
You can find him in the nether.
And rarely he will spawn in as baby Shadow
The Chaos Emerald looks a little big and it doesn't do the second layer of texture but still it is a sight to behold.
You can tame him with an enchanted apple but that just makes him friendly(to players) and follows you.
CHAOS EMERALD
This is what it looks like.
This item has no current use, I added it for Shadow to use as an accessory. (future update will have it work)
This is all The chaos emerald is for.
SHADOW IMAGE
This is just an image meant for an item frame as a poster. Looks nice tho.
CHAOS SPEAR
This item is OP. It edits the trident and makes it the Chaos Spear. It can be thrown like a trident but there is a twist... when you throw it, the Chaos Spear creates an explosion this large. The one thing is it is named "Trident" so just use an anvil and rename it.
BEFORE
AFTER
This weapon really packs a punch, They all have unique textures as well.

All you do is click/tap the link and the addon will install.